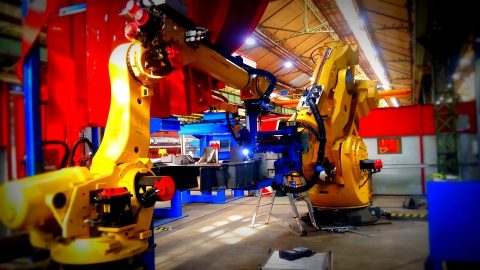 Alstom is installing the highest-capacity welding robot of the rail industry in its production facility in Le Creusot, Bourgogne-Franche-Comté. The innovation will improve the manufacture of parts for the new-generation RER and TGV trains. The new equipment will be fully operational by the end of May.

The highest-capacity welding robot was supplied by Farman, a subsidiary of the Galilé group specialised in robotic installations. The new equipment is a combination of three robots, custom-built in response to Alstom’s specific needs. The Farman’s robot provides automatic welding of steel or stainless steel parts and handles bulky parts with a maximum weight up to a tonne and a maximum length up to five metres. Alstom has invested more than 1 million Euros in the new installation.

“We are very proud to be commissioning this welding robot just over a year after placing the order. There are only two other robots of this type in the world, and they are in the aeronautics and automotive industries. The only tool of its kind in the railway sector, the robot will help us meet our current and future industrial challenges,” said Patrick Plichon, director of Alstom’s Le Creusot site.

The new robot will be involved in thirty projects being developed in Le Creusot. One of them is the development and manufacture of the Avelia Horizon double-decker units, the fifth generation of TGV high-speed trains. French national railway operator SNCF ordered 100 trainsets for 3 billion Euros in July 2018. The first units will be entered into service in 2023. The delivery should be completed in 2033.

The Alstom’s Le Creusot facility currently employs over 700 people. On average, it provides the design, approval and manufacture of 1,500 bogies and 15,000 dampers per year for the group’s rolling stock. Moreover, the Le Creusot site generates about 1,900 jobs for its regional suppliers. The new welding robot will improve working conditions by taking the strain in operations previously handled by workers and enabling them to gain new skills in robot programming and operation.