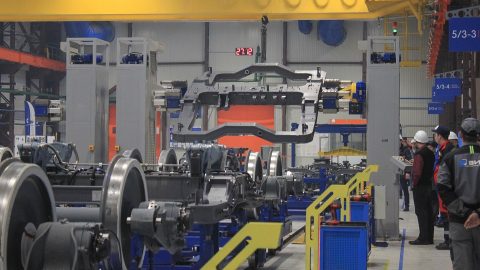 Russian manufacturer Metrovagonmash, a subsidiary of Transmashholding, has launched an automated production line of bogie assembly for rolling stock. The company invested 35 million Rubles (around 453 thousand Euros) in new equipment.

The production line was officially opened at the end of December 2018. It is capable to produce more than 1,500 bogies per year that are 40 per cent more than the existing capacities for bogie assembly. The new facility was designed and installed by Metrovagonmash engineers in nine months. The line allows to reduce the time for bogie assembly and to improve productivity by 30 per cent. Metrovagonmash is expected to repay back its investments in equipment during a two-year period.

The automated production line consists of six assembly spots. The bogies move from one location to another automatically. The line is operated by a computer under control of the special staff. The system is also equipped with three interactive monitors displaying the work at each assembly spot, the causes of delays, standstills or equipment failures.