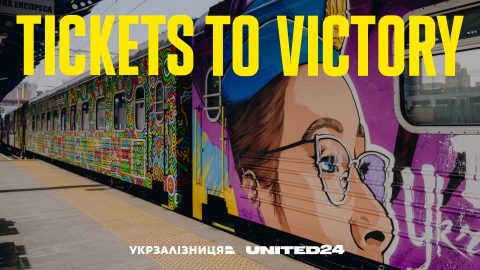 Published on 21-11-2022 at 13:30
'Tickets to Victory' to liberated Ukrainian cities Ukrzaliznytsia

Last Saturday, the first train from Kyiv arrived in Kherson in Ukraine since the city was liberated from Russian occupation. On board were passengers, politicians as well as Ukrainian Post parcels and letters that had not been delivered since 24 February. The train was dubbed the Train to Victory, and it has already safely returned to Kyiv.

In the almost nine months that Russian forces first occupied the city, train traffic came to a standstill. This weekend, the arrival of the first train was celebrated in the presence of politicians such as Oleksandr Kubrakov, the minister of Infrastructure of Ukraine. “Grateful to all railway workers of Ukrainian Railways for restoring the rail service in such a short period”, he tweeted.

The railway workers restored the damaged infrastructure in the shortest possible time, restored the Kherson railway station to life and finally raised the Ukrainian flag over it, says Ukrainian Railways in a statement. Also, a delegation of the European Commission led by its executive vice-president Valdis Dombrovskis visited Kherson on the first train journey since its liberation.

The CEO of Ukrainian Railways also attended the arrival. “Our train to Kherson brings life back to town. With tears, but tears of happiness”, commented Alexander Kamyshin.

Kherson was liberated from the Russian forces on 11 November. The railway station in the city was among the first to be supplied to the electricity network. The train also enabled passengers and passers-by to connect to their loved ones thanks to the satellite internet technology of Starlink.