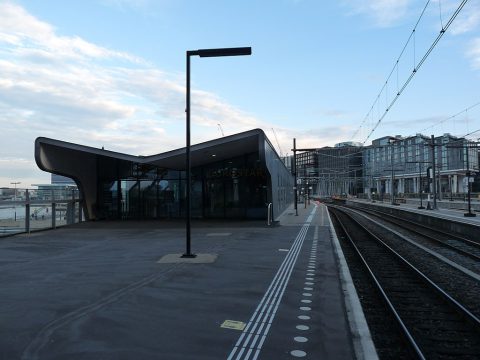 Published on 01-11-2022 at 07:03
The current Eurostar terminal will have to make way for construction works. 2020, Smiley.toerist / Wikimedia Commons

The Eurostar check-in and customs facilities at Amsterdam Central station will be moved to a new location. Earlier plans called for the removal of the terminal building during construction works, which threatened to put a stop to departures from Amsterdam for several years.

Amsterdam Central station will receive a comprehensive makeover in the coming years. From 2024 onwards, work will be ongoing to make the necessary adjustments in order to facilitate the Netherlands’ high-frequency rail programme’ (PHS).

The Eurostar lounge and terminal were going to have to make way in order to make room for construction. State secretary for Infrastructure and Water management Vivianne Heijnen at the time already said that a possible suspension of Eurostar departures from Amsterdam as a result of the terminal closing would be “unacceptable”.

Now, it has been decided to move the facilities to the so-called Amstelpassage at the station. The new Eurostar terminal at Amsterdam Central station will get almost triple the current capacity of 250 travellers. An opening date has yet to be announced. Until that time, the current facilities will remain in operation to check in travellers to Brussels or London.

A temporary location was one of the ideas being floated at the time in order keep Eurostar services from Amsterdam going during construction. A permanent location will not be available until at least 2036, when the third platform of the Zuidasdok project is delivered on the southern edge of Amsterdam’s inner city area.

This story was first published by Dutch sister publication SpoorPro.