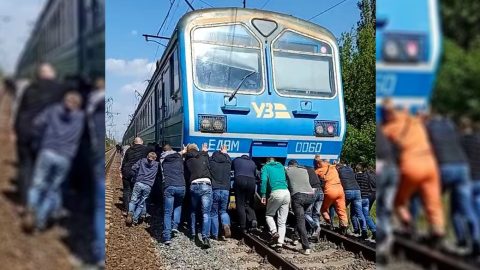 More than a dozen passengers pushed 6 train cars of the Kyiv-Nizhyn electric train for 25 metres on Tuesday. The train had stopped on a section without voltage as someone had broken the stop valve. The passengers took matters into their own hands to get the train back on the electrified line to continue running.

It would have taken two hours for a locomotive to haul the train back on the right track, press secretary of the regional branch of the Ukrainian South-Western Railway Anna Kazimir told Ukrainian medium the Public (Суспільне). Therefore, the driver offered to push the electric train with six cars by himself in order for the train to get voltage again and continue moving.

Passengers then came to the driver’s aid and, so as not to wait two hours, helped to push the train. This solved the issue a lot faster, because at 14:38 – a mere ten minutes after the train had come to a halt –  it already resumed its movement, according to the press secretary.

Ukrainian Railways (Ukrzaliznytsia), who shared a video of the event on Telegram, does not recommend passengers to push a train, as it can be dangerous. “Although we admire such strength in Ukrainian hands, we still ask you not to compete with the auxiliary locomotive in the future, because such exercises are quite dangerous”, they wrote in the post.

Watch the video below: