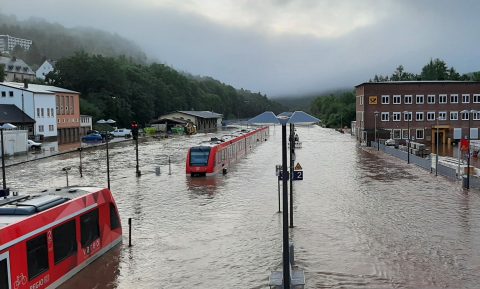 A fundraising campaign by Deutsche Bahn for those affected by the floods in the summer raised a total of 4.65 million euros. This sum benefits DB employees, who can use it to absorb their personal losses.

In July this year western Germany, just like the Netherlands and Belgium dealt with extensive rainfall which resulted in floods. More than 200 people died. In Germany, North-Rhine Westphalia and Rhineland-Palatinate were the two most affected states in Germany. More than 130 lives were lost here in the Ahr valley. Apart from human loss, the floods caused significant damage to houses and infrastructure.

In order to help survivors deal with their losses, Deutsche Bahn (DB) employees donated more than 2.3 million euros for their colleagues who were affected. In addition, they made almost 300 vacation days and around 1,000 overtime hours available with a total value of over 150,000 euros. The group has doubled the amount donated to a total of 4.65 million euros.

DB boss Richard Lutz: “The solidarity and solidarity within DB after the fatal flood in July touch me deeply. The DB team not only showed an overwhelming willingness to donate and help, but also lend a hand everywhere, of course. With great perseverance, everything is still being done to rebuild houses, buildings, infrastructure and train stations.”

Over half a million euros have already been paid out to around 450 affected railroaders nationwide. The damage ranges from full basements and destroyed cars to completely collapsed houses. Since much of the damage cannot yet be fully quantified, those affected continue to receive support. A commission ensures that the donations are distributed quickly and fairly.

DB Human Resources Director Martin Seiler: “The commitment of our employees is indescribable. In addition to the great willingness to donate, it was simply impressive that many employees actively helped their colleagues on site. It was clear to us that we too would take responsibility and not leave them alone to deal with this catastrophe.”

DB initiated the fundraising campaign in mid-July together with the BSW & EWH family of foundations, the group works council, the group speakers’ committee, DEVK, the railway and transport union (EVG) and the social security fund. The social institutions of the DB with the EVG and the union of German locomotive drivers (GDL) as well as the DEVK offer those affected additional help.