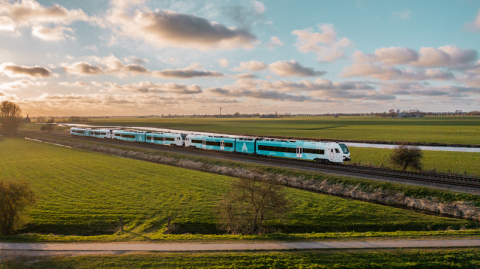 The test runs were conducted across the provinces of Overijssel and Gelderland on sections of track that are not fully electrified. ProRail wants to eventually abandon diesel-powered trains on the 572 kilometres of tracks that remain without overhead lines. Installing those lines are costly and time consuming, making battery trains a viable alternative. The outcome of the trials will assist in the decision on whether or not to purchase such train sets in the future.

The WINK uses its pantograph to charge its batteries will running on sections with overhead lines. Once on sections without, the train can switch to battery power alone. The train set used during the trials used the battery packs that normally serve to store energy recuperated from deceleration and braking as its main power source for propulsion. The train had to be modified because the first battery trains capable of using the current 1,500 kV overheadlines won’t make it to market until 2023.