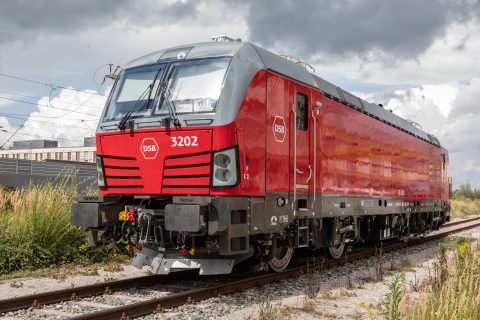 Following the approval by safety authority ‘Trafik-, Bygge og Boligstyrelsen’ on September 15, the new locomotives for DSB will operate in Denmark and Germany and will be used primarily in regional transport as traction for DSB’s double-decker passenger cars. All locomotives have a maximum power output of 6,400 KW and a top speed of 200 kilometres per hour. The Vectron AC is designed to operate on 15 kV / 16.7 Hz as well as on 25 kV / 50 Hz voltage systems and is equipped with the control systems needed for Danish tracks. Additionally, they have the ETCS train control system on board which is necessary for using the ERTMS safety system that is being rolled out in Europe.

The locomotives are built in the Siemens Mobility plant in Munich-Allach, Germany. The Vectron can be delivered as a purely electrical version for operating with alternating current (AC) or direct current (DC) power systems as well as a multi system (MS) variant in the power classes 5.2, 5.6 and 6.4 megawatt. The first Vectron was delivered in 2012. Siemens Mobility has sold over 1000 Vectrons to date to a total of 49 customers.

“With the Vectron, Danish State Railways is getting a fleet of modern locomotives that stands for quality and high reliability. The approval and commissioning of the Vectron in Denmark is an important contribution to providing sustainable European rail transport. We are especially pleased that we can hand over the locomotives to our customers earlier than originally planned,” says Michael Peter, CEO of Siemens Mobility.

According to Siemens Mobility, the Vectron locomotives are energy-efficient and sustainable. The electric Vectron permits elevated electric braking effort of up to 240 kilonewton. The recovered energy is efficiently used to supply auxiliary equipment, and is fed back into the grid wherever possible. With a total weight of 85 t and a 98% recycling rate, what remains of a Vectron electric locomotive after recycling is about 1.700 kg of residual materials – the weight of a mid-size passenger car.

“For DSB, the future begins very concretely with the delivery of these first three Vectron locomotives from Siemens. The electric locomotives will have a positive effect on our environmental footprint both in relation to energy consumption and local particle emissions, and will further support DSB’s targets to provide sustainable, reliable and flexible train operation that will benefit our customers”, says Flemming Jensen, CEO of DSB.