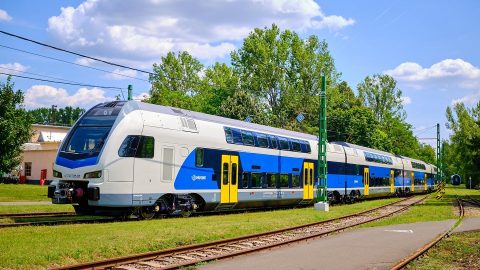 Hungarian railway operator MÁV-Start has ordered an additional 21 Kiss double-decker trains from Stadler Rail. The new batch of high-capacity vehicles costs approximately 313 million euros. With this order, the number of double-decker trains in MÁV-Start fleet will increase up to 40 six-car units by the end of 2022.

The new contract between Stadler Rail and MÁV-Start is the second option of the deal concluded by the parties in April 2017. Initially, MÁV-Start booked 11 double-decker trains. In 2018 it added eight other units to its order. And 21 units, according to the current agreement, are the remaining option to be utilised by MÁV-Start. The final, 40th, double-decker train must be delivered by Stadler Rail and its Hungarian partner Dunakeszi Járműjavítóban by the end of 2022.

MÁV-Start has rolled out the first double-decker train in July 2019. The railway operator plan to introduce Kiss electric multiple units on its routes in February. They will run on two lines: Budapest–Vác–Szob and Budapest–Cegléd–Szolnok. Each Stadler’s double-decker train has a capacity for carrying up to 600 passengers. This will allow the operator to double the capacity on the mentioned routes.

The vehicles will be accessible for passengers with reduced mobility, multifunctional areas designed for transportation of four wheelchairs, twelve bicycles or five prams. It is worth to note that the ordered double-decker trains will be mostly produced in Hungary, at the Stadler’s centre in Szolnok, and will be assembled by Dunakeszi Járműjavítóban, a Hungarian rolling stock manufacturer based in the vicinity of Budapest.