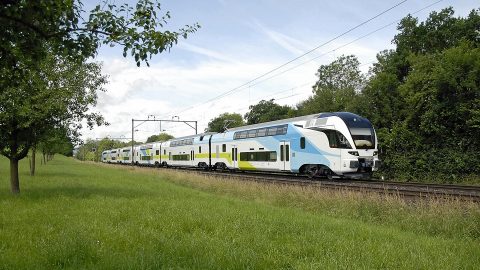 Trying to compete with state-owned railway companies, the open-access operators are looking for new options to improve their service. One of the solutions is the use of double-decker trains. Two non-incumbent operators have such vehicles and one of them is buying the new ones.

This week WESTbahn, the Austrian open-access operator, has ordered 15 new double-decker trains for 300 million euros. Stadler Rail will supply to WESTbahn the third-generation units of the KISS type in order to replace the previous generations of the same train family. With the help of new six-car trains, WESTbahn will increase its seating capacity and provide a more comfortable and faster trip for the customers. The newly ordered trains are able to speed up to 200 kilometres per hour (instead of 160 kilometres per hour for the previous-generation units). Each double-decker will have 526 comfortable seats and a modern self-service café.

WESTbahn is one of the first railway operators to enter service the KISS double-decker trains. Stadler Rail produced the first vehicle of this type in 2008 for Swiss Federal Railways (SBB). WESTbahn introduced them on its Vienna–Salzburg route in 2011. Initially, the Austrian company purchased seven units, then it ordered 10 additional units. The trains from the second order were entered service in 2014. In July of this year, WESTbahn decided to sell its entire double-decker fleet to Deutsche Bahn (DB).

Czech private company RegioJet gives another example in using the double-deckers by the open-access operators but with several differences. In comparison with WESTbahn, RegioJet purchased not the new but the secondhand double-decker trains from DB Regio, a subsidiary of Deutsche Bahn. Moreover, the Czech company is operating them on the Bratislava – Dunajská Streda – Komárno regional non-electrified route in Slovakia. Therefore, these vehicles are running as push-pull trains hauled by diesel-powered locomotives (WESTbahn’s double-deckers are the electric multiple units).

The fourth difference is the number of trains: RegioJet acquired only two five-car sets (compared to 15 six-car fleet of WESTbahn). And the last difference is the schedule of double-decker trains. RegioJet uses them on the Bratislava – Komárno line only during the rush hours while WESTbahn will apply them constantly. It is quite possible that the Czech company will intensify the use of double-deckers in the future due to increasing passenger traffic on the mentioned route or other lines.