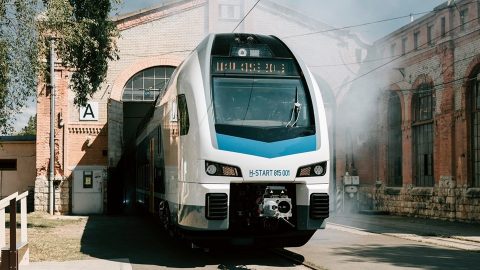 Hungarian rail operator MÁV-Start has presented the Kiss train, the first double-decker electric multiple unit to run on the country’s network. The vehicle was manufactured by Stadler Rail together with local partner Dunakeszi Járműjavítóban. MÁV-Start will start to operate the double-deckers on the Budapest–Vác–Szob and Budapest–Cegléd–Szolnok routes from February 2020.

In the coming months, two Kiss six-car trains will be tested in Czechia and Germany in order to receive operational approval. Totally, MÁV-Start has ordered 19 double-decker units of this type. 11 vehicles are scheduled to start operations in February 2020 while other eight units will begin to run at the beginning of 2021. Each six-car Kiss train has a seating capacity for 600 passengers. The vehicles are equipped with EVM and ETCS Level-2 train control systems, modern passenger information system, air-conditioning and Wi-Fi. They are also accessible for passengers with reduced mobility. The Kiss trains will run in Hungary at a speed of up to 160 kilometres per hour.

Several manufacturing facilities of Stadler Rail and its partners are involved in the production of the Kiss trains. 132 bodies for these vehicles are produced in Hungary at the Stadler’s centre in Szolnok. The majority of Kiss trains for MÁV-Start will be assembled by Dunakeszi Járműjavítóban, a Hungarian partner of Stadler. At the same time, the carriages and the car bodies are made by Stadler Minsk, a Belarusian subsidiary of the Swiss group. The Belarusian facility is also responsible for assembling of three trains.

Stadler Rail is developing the Kiss train family since 2008. This type run in seven countries: Switzerland (SBB and BLS), Germany (Ostdeutsche Eisenbahn), Austria (WESTbahn), Luxembourg (CFL), Russia (Aeroexpress), Georgia (Georgian Railways) and Azerbaijan (Azerbaijan Railways). Initially, Stadler Rail was manufacturing the Kiss trains in Switzerland. In 2015 the new production line was opened in Belarus. Most of the vehicles running in Russia and all of them using in Georgia and Azerbaijan were produced by Stadler Minsk. In the coming years, the Kiss trains will be introduced on the railway networks of Sweden, USA, Hungary and Slovenia.