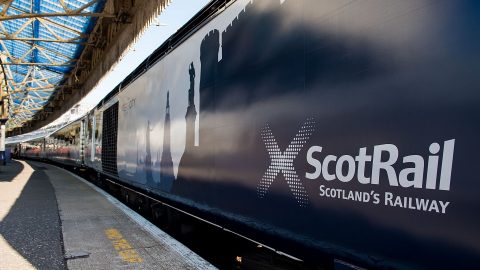 The Dutch-owned train operator is to be ousted from its franchise contract in Scotland. It will be removed at the first break clause, in March 2022, said Transport Minister Michael Matheson in a statement to Scottish Parliament on Wednesday, 18 December.

Just days after the launch of a new timetable and the opening of a new station in Glasgow, Abellio has reached the end of the line in Scotland. The operator, which has been managing almost all services on the Scottish network of over 350 stations since 1 April 2015, had the signals turn red at this afternoon’s session at Holyrood in Edinburgh. The news comes ahead of a UK-wide report, which is expected to call into question the viability of the entire franchise system of management for the railway network in Britain.

The Transport Minister Michael Matheson, representing the ruling Scottish National Party, was unapologetic in his statement. “We are not satisfied that the significant increase in public subsidy that would otherwise be required would generate commensurate benefits for passengers, communities, and the economy. I have today issued a notice to inform Abellio Scotrail of the decision. Therefore the current franchise agreement is expected to come to an end in March 2022.”

Opposition parties in the Scottish parliament reacted, some with anger at the ruling SNP. The socialist aligned Labour Party, who campaigned at the recent UK General Election for the nationalisation of the railway, was foremost among them. Their transport spokesman at Holyrood, Colin Smith, was furious that the Scottish Government had not acted sooner. “Abellio failed to meet the basic contractual requirements. They’ve breached the franchise on punctuality, cancellations and passenger satisfaction, and they have let down the hard-working ScotRail staff.”

The railway development lobby reacted around the country. In the south of Scotland, the Campaign for Borders Rail, which is working towards a new cross-border line to England, said that the franchise holder had been warned. Vice-chair Marion Short said: “Severe overcrowding on many parts of the network has brought fury from passengers all over Scotland, and has been very acutely felt in the Scottish Borders. Factors such as staff shortages and late delivery of rolling stock have crippled the reliability of services. The First Minister of Scotland said earlier this year that Abellio was in the last chance saloon, and today her Transport Minister has finally called time.”

A robust Alex Hynes, the Managing Director of Abellio Scotrail, said that it was, however, business as usual from a railway point of view. The nature of the business was that he would continue to roll out the planned programme of works already in the pipeline. These have recently included infrastructure and service improvements around Aberdeen in the northeast of Scotland, and new electric rolling stock for Central Scotland. When asked in a radio interview if there was any likelihood of Abellio bidding for any other franchise operations it the UK, he was tight-lipped, and merely said he expected to work in the industry for the rest of his career. Abellio for its part has shown no lack of appetite, and only recently took on the East Midlands franchise in England.

The story led the news in Scotland. The BBC’s Economic Correspondent Douglas Fraser said that there had been severe problems on many parts of the network and, while the Transport Minister did not specifically blame Abellio, he took the legally open route to end the contract at the earliest opportunity. Mr Fraser also pointed out that the Scottish Government had acted just ahead of the Williams Report – a review of the entire UK railway franchise model, which may well call for radical changes to the management of the railways.

By the following procedure, the Transport Minister did not open the Government to a legal challenge, but his words left some speculation that the franchise may be handed back to the government early. That’s not without president, as the East Coast franchise, principally serving Edinburgh and London, has failed on several occasions, and required the UK government to step in. There is speculation in Scotland that a public sector bidder could already be lined up to take over the operation of ScotRail.

Whether the Scottish Government finds itself to be taking back the ceremonial whistle in March 2022, or much sooner, remains to be seen. The only certainty is that the buffers are fast approaching for Abellio in Scotland, and their train is terminating early due to the wrong kind of ministerial announcement on the line.