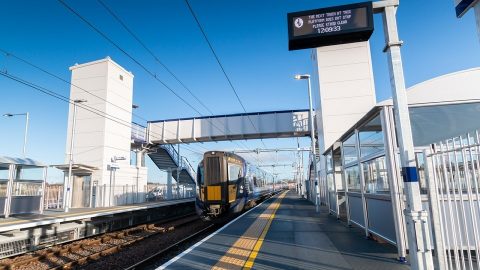 UK’s railway operator Abellio ScotRail has added the new train station to its rail services in the Greater Glasgow area. Robroyston has become the 355th railway station in the company’s network and the 60th railway station in Glasgow. The new facility will improve connectivity between the city core and northeastern districts.

Robroyston station has been available for passengers on Sunday, 15th December, with introducing the new timetable. Its official opening ceremony took place on Monday, 16th December. The new stop is located in the northeast of Glasgow. It will provide faster and more affordable access for the residents of Robroyston and Millerston to the city core of Glasgow and to the Scottish capital Edinburgh. The station is located minutes away from junction two of the M80 and has 263 free parking spaces. As a result, the drivers are able to travel to the city centre with congested traffic and, instead of it, to use more convenient trains. Robroyston railway station is accessible for passengers with reduced mobility. The cyclists can also park their two-wheelers at the station.

“The opening of the brand new Robroyston station is another milestone as we build the best railway Scotland’s ever had. Robroyston station is central to attracting more investment in the local area and creating new low-carbon travel opportunities. It proves the power of the railway as a key driver of the economy,” noted Alex Hynes, Managing Director of ScotRail. According to the estimations, the new station will unlock further economic development in the area, with a proposal for a new 1,600 strong housing development.

With launching Robroyston railway station, Glasgow has confirmed once more its title of a city with the second-largest, after London, suburban railway network in the UK. ScotRail serves the new station by new Hitachi-built Class 385 electric trains. They run on the entire route between Glasgow Queen Street and Edinburgh Waverley from Mondays to Saturdays. On Sundays, the train service is shortened to Cumbernauld station. ScotRail’s trains heading to Glasgow Queen Street stop at Robroyston station twice per hour and reach the final destination in 12 minutes. The connections to Edinburgh Waverley are provided with the same frequency. In this case, a journey lasts 63 minutes.

Robroyston station is situated between Stepps and Springburn on the Edinburgh – Glasgow via Cumbernauld line, one of five lines linking Scotland’s two largest cities. It was constructed on land that was previously home to a Robroyston station and a marshalling yard that was closed more than 50 years ago. The construction works started in the mid-September 2017. They were performed by AmcoGiffen as the main contractor. The project costs 14 million pounds (around 17 million euros) and was funded by Transport Scotland, Strathclyde Partnership for Transport (SPT), Glasgow City Council, Network Rail.