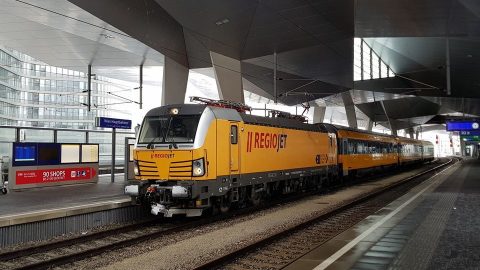 Czech private railway operator RegioJet will launch a new passenger train in June 2020. It will connect three countries in Central Europe: Czechia, Austria and Hungary. The new service will run from Prague to Budapest via Vienna and Brno twice a day.

RegioJet will open the train connection in a partnership with WestBahn (Austria) and Continental Railway Solution (Hungary). The new link will be the extension of the company’s railway service between Prague and Vienna. Now, the operator has four connections per day from Prague to Vienna via Pardubice, Brno and Břeclav. On the Prague – Vienna – Budapest route, the passengers will be able to use three classes of service (Standard, Relax та Business) like on other company’s railway links.

The operator also promises to implement special discounts on the route. “Our policy is to offer the best service at the best prices for rail passengers. For example, on the Prague – Vienna line, we have shown that it is possible to bring much higher quality services on trains at much lower prices compared to traditional train operators. We can say that we will offer the quality and comfort of the train at bus prices,” said Ivana Kašická, director of RegioJet for train and bus service.

With launching the new train, RegioJet will increase the competition on the route from Czechia to Hungary. The connection between Prague and Budapest is provided by the state-owned rail operator České dráhy in a partnership with MÁV-Start (Hungary) and ZSSK (Slovakia). However, this service has one significant difference from the RegioJet’s train: it runs via Bratislava, the capital of Slovakia and bypasses Austria. Now, České dráhy and its partners offer seven trains per day on the Budapest – Bratislava – Brno – Prague route. Six trains belong to the EuroCity category, they are branded as Metropolitan. The seventh service is the EuroNight train known as Hungaria. It runs from Budapest to Hamburg via Bratislava, Brno, Prague, Dresden, Berlin.

The Prague – Vienna – Budapest train will be the RegioJet’s first railway service to connect the capitals of two foreign states. Currently, the operator’s trains run only from Prague to Vienna and Bratislava, the capitals of neighbouring Austria and Slovakia. Also, RegioJet has a long-distance train from Prague via Žilina to Košice, the second largest city in Slovakia. Besides the train service, the company operates the numerous bus links including those ones from Prague to Vienna, Budapest, Bratislava and other cities.