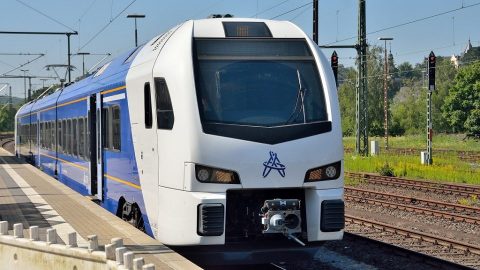 NMBS has no plans for its own Three Countries Train

For a number of years, Dutch and Belgian authorities, rail operators and rail infrastructure managers have been discussing an international rail connection between four cities in Belgium, the Netherlands and Germany. Until the Dutch trains are authorised to run on Belgian tracks, it was rumoured that a Three Countries Train was going to run from Belgium.

A report in the Dutch media at the beginning of July led to questions in the Dutch parliament about the Three Countries Train (Drielandentrein). While Arriva trains cannot enter Belgium, as they do not have the right safety system, it was reported that the NMBS/SNCB had plans to operate on the line between Liège, Maastricht and Aachen. NMBS says that while it has studied options for a half-hour service between Liège and Maastricht, it has no concrete plans for such a service, and certainly has no plans to run trains through to Aachen.

“As part of our Vervoersplan 2020 [Transport Plan 2010] we have looked at whether trains can run between Liège and Maastricht every half hour, instead of every hour as they do now”, explains NMBS/SNCB spokesperson Bart Crols. “This is one of eleven studies that we have done into new options. It is only a study, and it was requested by various parties. We are still in consultation with Arriva and the other parties involved, as we believe in the Three Countries Train, but first, the rolling stock needs to meet the requirements.”

When Arriva was asked about it, it said that NMBS/SNCB was not working on a proposal for a Three Countries Train, but was only doing a study based on a vision for regional transport around Liège. “But NMBS has stated that would like to cooperate on the Three Countries Train, and this is also true of the NS”, according to Arriva spokesperson Roos Zevenboom. Arriva is in any case happy about a half-hourly cross-border service from Belgium to Maastricht, run by SNCB, and believes that it could be integrated into the RE 18 Three Countries’ Train service.

Until now, the biggest obstacle for starting the service has been getting Arriva’s Flirt rolling stock onto the Belgian network. The Stadler trains need to be equipped with ERTMS. In the Netherlands and Germany, exemptions have been applied until a final decision has been made about ERTMS, but Belgium is sticking to the European rules. Additionally, the Dutch Ministry of Infrastructure and Water Management reported that the rail operators concerned (NS, Arriva and NMBS/SNCB) still needed to conclude agreements on a number of elements, including operation. At Visé Station, just on the Belgian side of the Belgium-Netherlands border, alterations need to be made to a platform, and a capacity request must be made and dealt with. This summer, an administrative dialogue will be held between Belgium and the Netherlands about these issues. 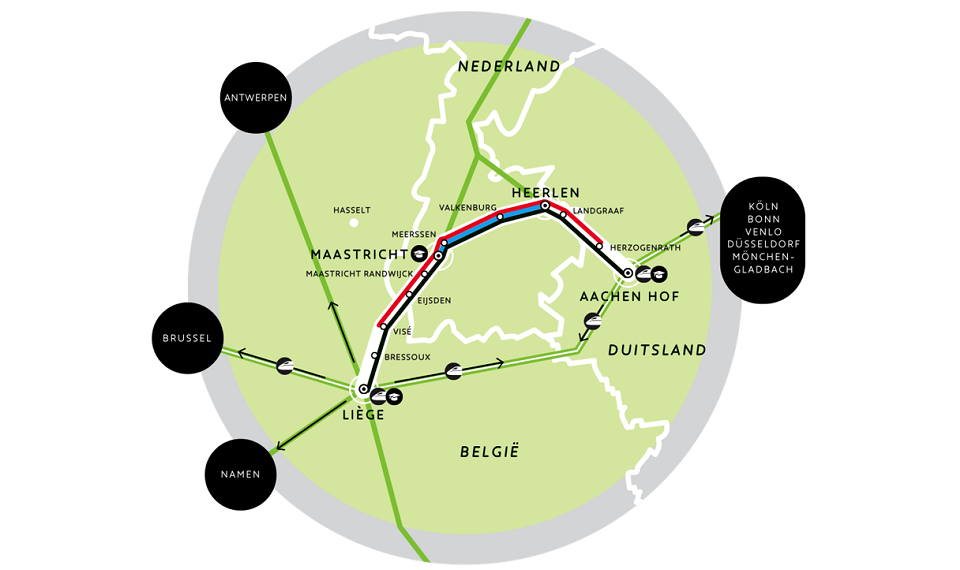 The route of the Aachen – Maastricht – Liege train, source: Eurekarail.

Germany is no problem

For this international train line, Arriva purchased eight Flirt 3C trains from Stadler. These can run on three different voltages and are equipped with the three safety systems used in the respective countries (ATB, Indusi and TBL1+). Preparations are also being made to build in ERTMS into the trains. Germany has no objection to the Arriva trains, and Arriva states that the Three Countries’ Train functions well there.

On 1st June, Arriva, the Human Environment and Transport Inspectorate (ILT), the Ministry of Infrastructure and Water Management and Stadler ironed out the last issues, removing the final formal obstacles for the operation of the trains. “We are happy that the ILT has approved the trains. This also ensures that the trains will be allowed into Germany”, states Arriva. “Currently, we operate the train in two countries. To be allowed into Belgium, the authorities there demand that the train meets ERTMS safety system requirements. We know the conditions set out by the Belgian authorities, and the concerned parties in the Netherlands are working on these.”

A possible solution for the problem of Dutch trains entering Belgium is European approval from the ERA, the new central European authorisation authority. Unfortunately Belgium, unlike Bulgaria, Finland, France, Greece, Italy, the Netherland, Romania and Slovenia, will only recognise the ERA from 2020.

The delay with the introduction of the Three Countries’ Line is just one of many examples of cross-border trains where various systems, permitted speeds and affected stations have been a cause for negotiation. Another example is a faster connection between Berlin and Amsterdam, which the Netherlands and Germany have been discussing for years.