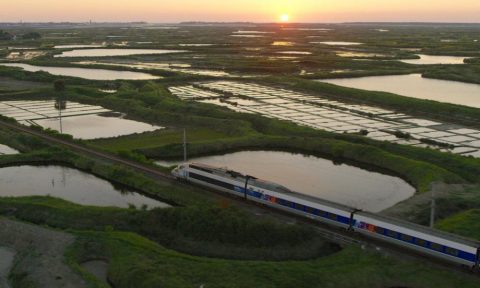 The extension of the French high-speed network is a recurring topic. For several years now, four projects have been the subject of debate, some of which require substantial funding. The French government is considering the construction of these four new railway lines, which we will take a look at in this article.

France already has about 2,600 kilometres of high-speed lines, and with that ranks fourth in the world. The TGV network in the country carries about 110 million passengers a year, the vast majority by SNCF TGVs.

When president Macron came to power in 2017, the plans to build more high-speed lines were halted. However, with the need to reduce emissions, expanding high-speed rail has more of a chance. Last April, the French parliament passed a bill to ban domestic short-haul flights that can be reached by train within 2.5 hours.

A map of the four lines is showed below, the article continues below the image

The cheapest and most essential of the four TGV lines currently being studied is the “Barreau de Massy” (Massy connection). This is an essential link in the south of Paris, linking HSL from Lille, Strasbourg and Lyon with Atlantic HSL toward Rennes, Nantes and Bordeaux. This would increase the number of TGV trains linking the french regions without passing through the Paris stations, and would also save up to 30 minutes in travel time on these same trains. Thanks to a new station at Pont de Rungis, there would finally be an easy interconnection with Orly airport, avoiding passengers from the regions taking the plane to undergo the tedious change between Massy and Orly.

The new line would be what is known as a “mixed line”, meaning freight trains will also make use of the route, which is unusual in the French high-speed culture. This will require the flattest possible profile and a lot of engineering works. The government has just decided to earmark one billion euros for a first step between Montpellier and Béziers, (ca 53 kilometres). The 98 kilometres of the second phase between Béziers and Perpignan would not be completed until much later, by 2040.

The new line between Bordeaux, Toulouse and Narbonne is a controversial subject. It is not possible to significantly increase the speed of the existing line between Bordeaux and Toulouse, given its route and the fact that it crosses many urbanised areas. The question of the alternative of modernising the existing line has been the subject of several studies and an expert report by the Federal Polytechnic School of Lausanne in 2015, which confirmed SNCF Réseau’s position on the need for a new line.

10 billion euros would be needed to connect this high-speed line with the Montpellier – Perpignan line. The “Conseil d’orientations des Infrastructures” (Infrastructure Policy Council), argue for a new line, which would be not a TGV line, serving city centre stations with trains running at 250 kilometres per hour and which can be used by both passenger and freight trains.

The conventional coastal line between Marseille and Nice is totally saturated and runs through one of the most urbanised regions in France after Paris. A new line, called “Ligne Nouvelle Provence-Côte d’Azur” (LNPCA), is therefore essential, but it will be built in the hinterland. The local authorities seem to want, contrary to Occitanie region, for improvements to the existing line to Nice with an underground crossing and a station under Marseille, then a new mixed line with trains running at 270 kilometres per hour allowing the circulation of both TGVs and TERs or Intercity Expresses.

The State and the local authorities of Provence-Alpes-Côte d’Azur have agreed on a financing protocol for the first two phases of the LNPCA. A budget of nearly 3.5 billion euros that they hope Europe will cover up to 20 percent. To lure Europe, France and local authorities are counting on the inclusion of the LNPCA project as an essential piece of the corridor of the Trans-European Transport Network (TEN-T). From start to finish, this project will mobilise nearly 14.5 billion euros.

The future will tell what the timetable for these projects will be, and if the plans for the new high-speed rail lines will get the needed financial means to become a reality.