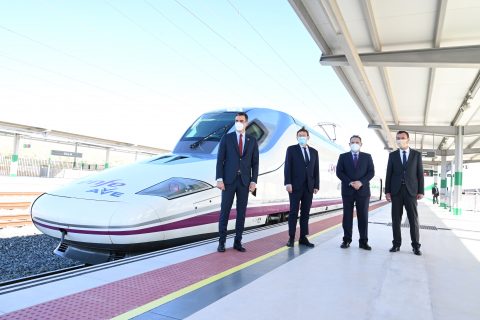 The Spanish high-speed line between Monforte del Cid, Elche and Orihuela in the province Alicante is officially opened. On February 1, an opening ceremony was held with Prime Minister Pedro Sánchez and Transport minister José Luis Ábalos at Orihuela Miguel Hernández station. The section is part of the Madrid – Castilla La Mancha – Valencian Community – Murcia Region high-speed ​​line, which in turn is part of the Mediterranean Corridor.

The 38.3 kilometre section of high speed line between Monforte del Cid and Orihuela near the Spanish East Coast started service on the same day. Spain’s Prime Minister Pedro Sánchez said during the ceremony that the high-speed line that connects Elche and Orihuela with Madrid starts with a frequency of two daily services per direction. The line is operated by Renfe under the high-speed service AVE. Later, the frequency will increase with one more trip per direction and in the final scenario four services per direction.

The high-speed section has double track in international gauge, and is equipped with both ERTMS Level 2 and ASFA Digital train control and ATP systems. The maximum commercial speed is 300 kilometres per hour.

The completion of the section marks a next stage of the high-speed project Madrid – Castilla La Mancha – Valencian Community – Murcia Region. The first 438 kilometres of the line, from Madrid to Valencia and Albacete, has been in operation since December 2010 and has contributed to making Spain the country in Europe with the most kilometres of high-speed rail. Adif High Speed ​​is entrusted with the execution of all the works on this line.

With the new high-speed section, travel times to Madrid have been greatly reduced from cities in the Alicante province. From Elche, a shorter travel time of one hour is realised compared to previous times, since it becomes directly connected to Madrid in 2 hours and 9 minutes. The train from Orihuela to Madrid now takes 2 hours and 22 minutes.

Spain’s Minister of Transport, Mobility and Urban Agenda, José Luis Ábalos, said during the commissioning ceremony that this new connection ‘shows the Government’s commitment to the Mediterranean Corridor’. He underlined the importance of the new connection for the Baix Vinalopó and de la Vega regions Baja del Segura, and especially for the cities of Elche and Orihuela. “The Mediterranean Corridor reaches its doors with another 54 kilometers from Monforte del Cid to Beniel, incorporating two new stations to its network: Elche Alta Velocity and Orihuela Miguel Hernández.”

Ábalos said he valued Europe and the drive to promote sustainable forms of transport. This is reflected in the budgets and also in the Recovery Plan, the minister said. “We need investments that, like the one we put into service today, advance in the implementation of the Trans-European Transport Network”.

Continuing work on the Corridor

The Transport minister recalled that in the General State Budgets for 2021, 1,982 million euros have been allocated to this infrastructure. This is double the amount of the 2018 budgets, which was 975 million euros. These budgets will allow to continue the work of the Mediterranean Corridor on which, specifically for the Valencian Community and the Region of Murcia. The minister has listed the following works as most relevant: