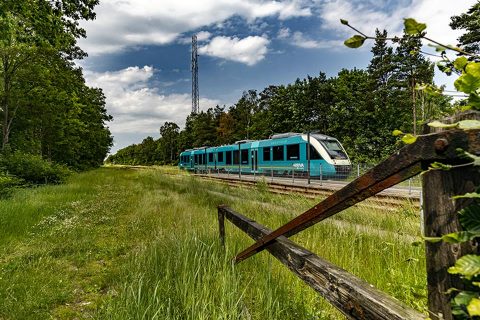 One step forward for ERTMS in Denmark

Denmark is moving further in deploying the European Railway Traffic Management System (ERTMS). The new digitised solution has replaced the old signalling system on the Thy Line in northwestern Jutland. It is the third railway route in Denmark equipped with the ERTMS.

Starting from Monday, 6 April, the ERTMS is in operation on the Thy Line (Thybanen), the 73.6-kilometre non-electrified route that runs from Thisted and Struer. Danish rail infrastructure manager Banedanmark has installed the new signalling equipment on the line in less than two months. In addition, it has replaced 48 boom barriers at the level crossings along the line.

For three days, the passenger trains ran on the upgraded Thy Line according to the Sunday timetable due to the quarantine restrictions caused by the coronavirus pandemic. Since Thursday, 9 April, they are operated in accordance with the ordinary schedule.

The ERTMS deployment on Thybanen was performed in a partnership with Arriva, a train operator that provides rail services on the mentioned line. Within the project, its drivers learnt from the experience of their colleagues from Danske Statsbaner (DSB) that drive trains on the Vendsyssel Line (Vendsysselbanen), the first ERTMS-equipped route in Denmark. “It will be of great importance to both the travellers and our drivers that we are now starting to run on the new digital signal system at Struer-Thisted (line),” noted Susanne Hejer, the director for train operations at Arriva Danmark.

The new signalling solution was being installed on Thybanen gradually. The 73.6-kilometre route was divided into four sections: Thisted – Snedsted, Snedsted – Bedsted, Bedsted – Hvidbjerg and Hvidbjerg – Struer. All the works took place only on Saturdays and Sundays. That’s why Banedanmark closed the train traffic on the mentioned sections during the weekends: 22-23 February, 7-8 March, 21-22 March and 4-5 April. During these periods, Arriva launched the bus replacement services.