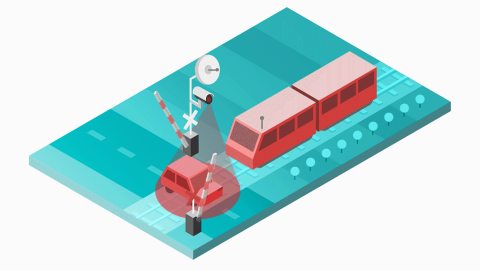 A level crossing is an important but often dangerous component of rail infrastructure. 517 people have died or been injured in level crossing accidents in the EU in 2017. To rectify the situation, Slovakian IT company GrowthPro has developed Erriate, an AI-based solution that is able to prevent accidents at level crossings.

A lot of rail infrastructure managers spend huge amounts to make level crossings safer for both car and train drivers, pedestrians and train passengers. Usually, they install barriers, signalling equipment or even video cameras. The digital solutions could be a good supplement to these moves and improve safety at the level crossings. For instance, Erriate is able to monitor level crossings and the area around them, detect risky situations such as a stuck car or injured cyclist and inform train drivers and emergency units on the possible accidents. How does it work?

To answer the question, it is worth to consider Erriate in detail. Lukáš Kakalejčík, CEO of GrowthPro, explains that the product consists of five key elements. The solution starts from the installation of the appropriate equipment (hardware) at the level crossing including video cameras and the Erriate control box, where monitoring software is running. If a level crossing has no nearby electricity sources, photovoltaics could be installed close to it. The second element is tablets with appropriate software and GPS module. Such devices will provide the train drivers with live-stream information and warnings about the state of the approaching level crossing.

Two other components include web-based interfaces. The first one is used by rail infrastructure managers and allows them to monitor, store, manage and share footage from possible accidents for further investigation. The other web-based interface is designed for emergency units in order to provide them with warnings about the location of possible accident. It also allows emergency units to respond quickly to any risky situation. And the last element of the Erriate solution is the server for data storage.

To provide better monitoring and informing are the main advantages of Erriate. “Artificial intelligence in the software quickly recognizes an object in the area around the level crossing and evaluates the time which is potentially needed for an incoming train to stop,” Mr Kakalejčík says and gives the following example. “A car suddenly stops at the level crossing, a train is 10 kilometres from the crossing and runs at a speed of 130 kilometres per hour. Erriate does the math, so in case the car can’t move it alarms the train driver which has enough time to slow down and stop,” he specifies.

At the same time, Lukáš Kakalejčík is frank and recognizes that Erriate is a good opportunity for the rail sector but not a panacea. “Obviously, we know that Erriate cannot prevent every accident. For example, if a car or person get at crossing right before the train, there is no chance to save them,” he says regretfully. However, even in this case, there is little hope to help them. “Erriate can immediately inform emergency units so they can come faster than before. When this kind of accident occurs, each minute might be a difference between life and death, so we increase the probability for people to survive”, Mr Kakalejčík specifies.

From theory to practice

For GrowthPro it took a year to develop Erriate. “The core technology means we were able to create an algorithm, test it, find the right complementary hardware that would function well with our technology,” tells CEO of IT company. The development team included nine persons, six of them were involved in developing the software and hardware while three other ones took care of initial feedback from rail infrastructure managers, online/offline presence and sales. Currently, GrowthPro is negotiating with rail infrastructure managers to test its solution. “Indeed, we are in negotiations with two railway network operators in Europe,” Lukáš Kakalejčík notes without mentioning the names of the companies. According to him, Erriate could be deployed at the level crossing in one month.

Besides negotiations with infrastructure managers, GrowthPro intends to continue its work on Erriate. “The core of our product strategy is to improve the accuracy of the algorithm so the main effort will be focused on this objective. For the future, we plan to add visible and hearable signals to the crossing system which will warn people inside the crossing. These signals can be also used in places where suicides occur,” Mr Kakalejčík clarifies. Also, his team tries to integrate Erriate with other technologies such as interlocking systems and find new areas for its implementation. “The basic technology used in Erriate can be also used for safety monitoring in depots or stations in order to increase the safety of passengers. Our system can be installed in the underground stations in order to notice threats such as drunk or aggressive people,” he sums up.

There is another question to be solved by the GrowthPro team. It is a price of the Erriate solution. “It really depends on several factors, such as number of level crossings, number of trains that should be connected to the system, access to the source of electricity near the level crossing, integrations with other systems etc. As hardware is necessary for each locomotive and level crossing as well, the total cost of the solution depends especially on the number of locomotives and level crossings,” Lukáš Kakalejčík explains.

He believes that these costs will return in a couple of years as savings from prevented accidents. “There are many scientific studies that estimate costs of level crossings accidents in million Euros in a single EU country every year. Erriate can save these costs and, that is even more important, it can save human lives. That could be a real benefit not only for Slovakia but for the entire European rail sector too,” CEO of GrowthPro emphasises.