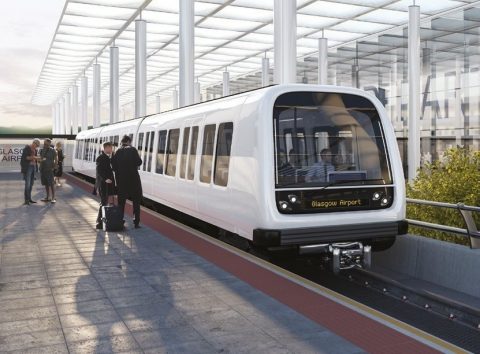 Glasgow Airport will get metro link

Glasgow City Council and Renfrewshire Council have joined forces in addressing the long-pending issue of the planned rail link to Glasgow Airport. Both bodies agreed to provide a metro connection between the airport and Paisley Gilmour Street train station. It will be the first phase of the metro line that could be eventually extended towards Glasgow City.

This decision is in line with the report of the Glasgow Connectivity Commission published last year. According to the document, the Commission’s experts proposed the city authorities to create a comprehensive metro network in Glasgow with an airport link. “The Commission recommends that the first route to be constructed should be that between Paisley Gilmour Street and Glasgow Airport. This first leg should be completed by 2025, in line with the existing timeframe for the Glasgow Airport Access Project,” the report tells.

On Monday, 6 January, the leader of Glasgow City Council Susan Aitken noted that the feasibility study should be prepared to perform the project. “The Scottish government has pledged to work with us on the Commission’s recommendations, while Glasgow and Renfrewshire councils will undertake the feasibility work required to ensure it can be considered as a key, national project. Funding is already in place to deliver a first phase, linking Paisley with Glasgow Airport,” the BBC quoted her words.

There is no exact information on whether the planned metro link will underground or aboveground. However, the mentioned report of Glasgow Connectivity Commission recommends constructing a tram-train line between Glasgow Airport and Glasgow Central station. The first phase between the airport and Paisley Gilmour Street station will be constructed from the ground. Meanwhile, the other sections should be converted from the ordinary heavy rails or will be built as conventional tram lines. In fact, the metro network will be the tram-train system served by special light rail vehicles. “A combination of segregated and street running would be possible by using the kinds of light rail vehicles used on the Porto Metro, which was designed to integrate disused rail corridors with street running from the outset,” the report says.

It is worth to note that the issue of a rail link to Glasgow Airport has been discussing since the mid-2000s. During that time, several proposals have been made in order to connect the airport to the city by rail. In November 2016 the tram-train project was chosen as the preferred option. This project was estimated at 144 million pounds (around 170 million euros). The construction works were expected to start in 2022 and to complete by 2025. However, the project was rejected in February 2019.

Glasgow is being operated its metro system since December 1896. This third-oldest underground rail network, commonly known as the Subway, is located mostly in the city centre. It consists of only one loop with two circle lines (clockwise and anticlockwise). The system has a unique gauge of 1,219 millimetres and a nominal tunnel diameter of 3.35 metres. As a result, the network is served by the unique three-car trains.

Due to its geographic limits, Glasgow Subway does not meet the needs of the city inhabitants. “Whilst the Subway does this job admirably for the very few parts of the city it serves, too many Glaswegians, particularly in the north and east of the city and the postwar housing estates, do not have the kind of reliable, quick, turn-up-and-go service that rapid transit offers,” the report of Glasgow Connectivity Commission notes.