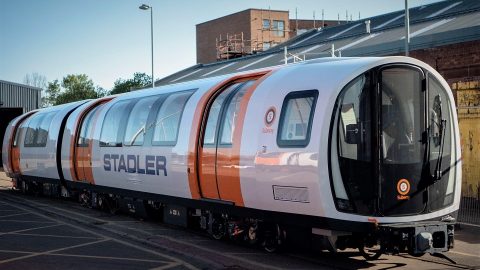 Swiss rolling stock manufacturer Stadler Rail has delivered a brand new four-car metro train to Glasgow. Two other trainsets will be supplied by the end of the summer. These trains will become the first autonomous metro vehicles in the United Kingdom.

In general, Stadler Rail is obliged to produce 17 four-car trains for Glasgow Subway. They were developed especially for the local underground rapid transit system with a unique gauge of 1,219 millimetres. The delivered train will be tested until the end of 2020 when the entering into service is scheduled. Initially, Stadler’s vehicles will run with a driver onboard. The driverless train traffic will be introduced in 2021.

Within the modernisation programme, Ansaldo STS, a partner of Stadler Rail and a part of Hitachi, will upgrade the metro stations and the tunnel build in the Victorian era, replace the tracks and turnouts, install new communication and control systems. The total project costs 288 million Pounds (more than 334 million Euros).

“This is a fantastic day for the Subway and for everyone involved in the delivery of the Subway modernisation programme. We are delighted to see the first new train in Glasgow. It’s a big day for the project team who have worked tirelessly to achieve this milestone for the organisation,” said Martin Bartos, Councillor of Strathclyde Partnership for Transport (SPT) that coordinates regional transport in the Strathclyde area of Scotland.

The Glasgow metro system, commonly known as the Subway, was opened in 1896. It is the third-oldest underground rail system in the world after London and Budapest. Its network consists of two circle lines with 15 stations and a total length of 10.5 kilometres. The trains painted in the orange colour run in two directions – clockwise and anticlockwise. Therefore, the Glasgow Subway is nicknamed The Clockwork Orange. The system is served by three-car trains. The Subway carries 40 thousand passengers a day and 13 million passengers a year.