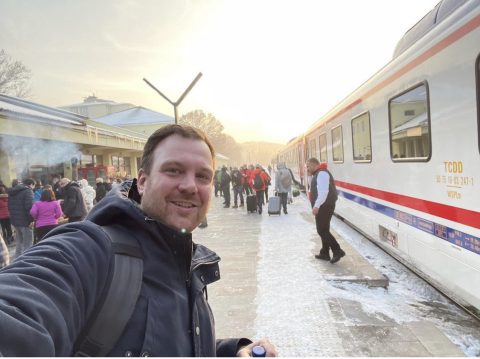 Amsterdam-Abu Dhabi by train? Yes, you can

International trains are all the rage in 2022. Travellers appreciate the comfort and the adventure of train travel, with the added benefit of much lower CO2 emissions compared to flying. But what if your destination is Abu Dhabi? Dutch adventurer Wiebe Wakker took on that particular challenge earlier this year.

When he was booked for a speaker engagement in the United Arab Emirates (UAE), Wakker knew that a flight would be the most straight forward way of getting there. However, when you are speaking on the topic on environmentally friendly travel, flying there does not reflect well. As such, Wakker set off on a journey via train, bus and -out of necessity- by plane from Amsterdam to Abu Dhabi.

This meant train travel across countries such as Romania, Turkey and Saudi Arabia. On the way back, the railway journey also went through Iran and Bulgaria, and a ferry trip from the UAE to Iran was included. Looking back, one of the things that stands out for Wakker is the price difference between train tickets in Western Europe and elsewhere. In Turkey, he booked a 22-hour train ride for 3,50 euros. Apart from that, train travel was smooth and pleasurable across the board.

“Only in Bulgaria the rolling stock and the rail infrastructure were subpar. That said, the Bulgarian Railways website is excellent, and so was staff on board the trains”, Wakkers told RailTech in an interview.

In many ways, the experience in Saudi Arabia was the polar opposite, with Saudi train stations bearing more resemblance to airports than anything else. “These stations had terminals, check-in desks and baggage handling”, Wakker recalls. He travelled between the cities of Hail and Riyadh, virtually in a straight line. “All the stations along the route were alike, yet thoroughly modern and well organised.”

On his return journey, Wakker also travelled by train in Iran. His journey was limited to the Teheran-Tabriz line, mainly due to the various tickets on other lines being sold out. “The train in Iran was definitely a highlight, with its carpets, the decorations and service on board.”

In terms of experience, the so-called Doğu Ekspres in Turkey takes the crown. The train service between Erzurum in the east and the capital of Ankara in the country’s interior has been a favourite of young Turks for many years, mainly after images of the route spread via Instagram. “We travelled across snow blanketed plains, mountains and lakes. It was gorgeous”.

In preparing for his mammoth journey, Wakker had navigate through various local ticketing websites and blogs such as Seat 61 in order to map out his trip. “I had to put in several days of research. Simply put; things are straight forward up until Vienna, Austria. After that, things get slightly more complicated.”

In breaking down his return journey from Dubai to Amsterdam to the numbers, Wakker came to a travel duration of 17 days during which he spent a total of 577 euros, of which 431 euros was spent on train tickets. A plane ticket would have cost him close to 600 euros at a travel time of 7 hours and 10 minutes. More importantly, that would have resulted in 1,341 kilos of CO2. His journey via train, bus and ferry only resulted in 469 kilos.

“Obviously it is not the most efficient way to get to Dubai, and I’m certainly not going to claim that this should be the way forward for travellers, but we do need to question why you would want to travel all the way to Dubai by plane for a single presentation”.

Why do we take air travel for granted?

All things considered, Wakker points to a number of areas with room for improvement. Apart from the obvious – a single route planner where you can buy one ticket for multiple journeys – that would be more flexibility for prices.

“I bought a ticket for the Eurostar to London once. The prices were such that it made me think it for was one of the last available seats. It wasn’t, and the train was pretty much empty. Why not offer tickets at a discount as the time of departure nears in order to give would-be travellers a little nudge?

As for long international or even intercontinental journey’s by train, Wakker says that if you are willing to sacrifice just a small bit of comfort, a wonderful journey is up ahead. “I really enjoy arriving in a city centre with my luggage in hand. Perhaps we’ve all gotten too accustomed to cheap air travel too soon. I for one find it strange that we take air travel for granted the way we do.”