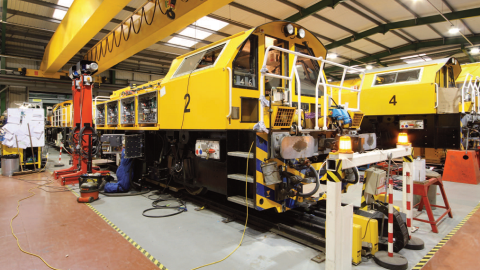 The hybrid locomotives are becoming more popular in the United Kingdom. After delivering this type to Tata Steel and Port Talbot, British locomotive manufacturer Clayton Equipment has found a new customer for its hybrid shunters. This time the battery-diesel locomotives will be used by the Nuclear Decommissioning Authority (NDA) for the operations at the Sellafield site in Cumbria.

Clayton Equipment will produce two hybrid shunting locomotives of type CBD80. They will be delivered to Sellafield Ltd, NDA’s subsidiary responsible for decommissioning the nuclear site of the same name. Each 80-tonne locomotive is able to power from battery energy and diesel fuel. Both options are environmentally-friendly. As for battery charging, it is provided from a three-phase supply at a zero-emission level while the EU Stage V Diesel engine has the improved features and produce much fewer emissions.

Clayton Equipment was established in 1931 and is based in Burton upon Trent, the West Midlands. The company is the only British independent locomotive manufacturer in the UK capable of designing and manufacturing locomotives up to 150 tonnes. It produces the nonstandard locomotives for the industrial companies including the rubber-tyred rail vehicles for the mining companies, small battery-powered units and even trolley locomotives. Seven Clayton CB40 vehicles are operated on the Crossrail project on the London Underground.