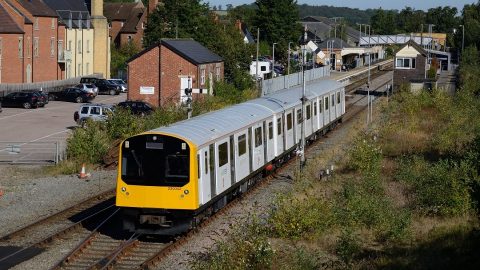 British rolling stock manufacturer Vivarail has completed the testing of its battery train, the first one in the UK. The Class 230 vehicle was approved for passenger transportation. This year, the diesel-battery hybrid trains will start to run regularly on the Wrexham-Bidston line in Wales and will replace the outdated diesel rolling stock.

“The Class 230 battery train is fully approved and ready for passenger service,” Vivarail reported in the mid-January after finishing the trials. Last autumn, the company started to examine its innovative hybrid train being able to run using both diesel fuel and battery energy. The vehicle has been performing successfully the test travels on the 40-mile (64-kilometre) section between Evesham and Moreton-in-Marsh on the Cotswold Line that connects Oxford and Hereford in England.

“With a new type of battery which we will use in our upcoming production trains, we are confidently predicting a range of 60 miles between charges with only a 10 minute charge time. We look forward to providing emission-free trains and playing a significant part in decarbonising the UK’s rail network,” CEO of Vivarail Adrian Shooter noted.

The Class 230 train is a name of the converted London Underground D78 Stock electric vehicles previously ran in the Tube. This type was developed and assembled by the English manufacturer Metro-Cammell at the turn of the 1970s and 1980s. It served the lines of London Underground until 2017.

In January 2015 Vivarail started its retrofitting project aimed to convert five three-car D78 trains into the diesel-battery hybrids. The first converted train was completed in May 2017 while the fifth vehicle was ready in February 2019. Meanwhile, in October 2018, Vivarail concluded a deal Transport for Wales for operating the hybrid trains on Wrexham-Bidston line within the Wales & Borders franchise.