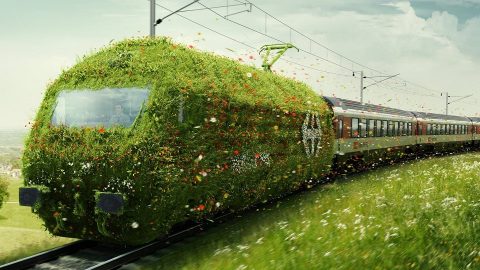 Europe moves towards a zero-emission economy. This ambitious goal must be achieved by 2050 within the implementation of the European Green Deal, the new strategy of the European Union focused on improving the well-being of people. Railways will play one of the key roles in decarbonising the EU economy. But to fulfil its mission, the rail sector must enjoy fair charging conditions compared to the other transport modes, considers Libor Lochman, Executive Director of the Community of European Railway and Infrastructure Companies (CER).

“It is an absolutely realistic goal. As of today, 80 per cent of rail services use the electric energy,” says Libor Lochman talking about the deadline set by the European Green Deal. To this end, he mentions several positive examples including the use of the green energy on the Dutch electrified routes which comprise over 70 per cent of the country’s railway network. Since January 2017, the wind energy is being used for powering the trains. The Dutch example is followed by the railway companies of Germany and Austria that are also focused on green energy. “On the other hand, we can see today the increase of attention to the hydrogen energy and batteries as an alternative to the diesel traction,” specifies Lochman. These moves are another corroboration of the railway potential in decarbonising the EU economy.

“From one point of view, there is no direct connection between the Track Access Charges and the European Green Deal. But if you wish to push the role of the railways, as from the prospect of the economy, business, attractiveness for the customers, you have to play this operational framework. And a part of this game could be also the reduction of the Track Access Charges. Especially it is related to the rail freight sector. The latter requires a dedicated masterplan which will include the considerations on the Track Access Charges,” explains the Executive Director of CER.

At the same time, Libor Lochman pays attention to another issue that will have a great impact on unlocking the potential of the railways and their role in the EU Green Deal. It is about the internalisation of external costs. “If we want to develop green mobility, we must put in place user pay and polluter pay principles across all the modes. It is vital for the European Green Deal and, of course, for the competitiveness of the rail sector,” notes Lochman. Afterwards, the Executive Director of CER adds that the charging system should be a very important component of this process. The association led by him has already issued several policy papers and announcements focused on this topic. Libor Lochman also specifies that achieving a level playing field especially between the railways and roads is very difficult: “It is a long-term perspective, the long-term dream. But we must do everything possible to make it true”.

Are you interested in knowing more about the interrelation between the European Green Deal and the rail sector? Libor Lochman will deliver more theses in his presentation at the Track Access Charges Summit 2020 to take place on 21-22 April in Riga, Latvia. The programme is available on the event website.