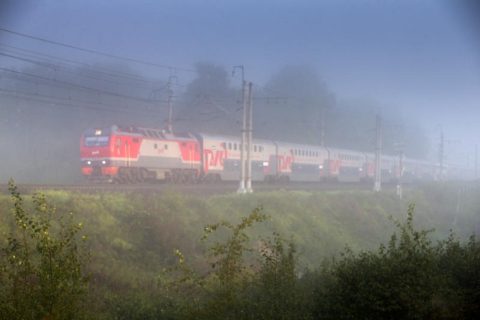 In the first days of December, Russian Railways entered double-decker push-pull trainsets on two daily lines previously served the single-decker units. On 3 December the high-capacity train started to run from Petrozavodsk to Moscow. It offers the passengers two classes of service and consists of 11 sleeping carriages, one restaurant carriage and one staff compartment carriage accessible for the passengers with reduced mobility. Four days later, the double-decker train was introduced on the route between Moscow and the city of Penza. It has a similar service and formation of carriages as the Petrozavodsk train with the only difference: 12 sleeping carriages. Both trains allowed RZD to increase the capacity on these lines: by 30 per cent on the Petrozavodsk link and by 40 per cent on the Penza link.

The third new route for Russian double-deckers was opened on 25 December. It is the link between Moscow and Bryansk. The double-decker nine-carriage trains run on this route three times daily. They offer three types of service: 1st and 2nd class sleeping carriages (one car per each class) as well as seating coaches (seven cars). In the next year, the double-decker carriages will be available for the passengers travelling between Saint Petersburg and Murmansk. This connection is under consideration, the exact date of its launch is being discussed.

After launching three mentioned routes, the network of RZD’s double-deckers has increased up to 12 lines. Most of them start in Moscow and go to Saint Petersburg, Kislovodsk, Kazan, Izhevsk, Samara, Adler, Voronezh, Petrozavodsk, Penza and Bryansk. The remainder link Adler, a popular resort within the city of Sochi, to Saint Petersburg and Rostov-on-Don. Usually, the double-decker trains run on the majority of routes one time daily. But some of the lines have more frequent traffic: three times daily from Moscow to Saint Petersburg and Bryansk, two times daily on the Moscow – Voronezh route. Most of the double-decker carriage are the sleeping ones. Only the trainsets running from Moscow to Voronezh and Bryansk include the seating coaches. All carriages were supplied by Transmashholding.

Besides long-distance routes, the double-decker trains also serve the commuter lines in Moscow. This service is provided by Aeroexpress, the private operator of rail links between Moscow and its three airports (Sheremetyevo, Domodedovo, Vnukovo). The company was incorporated by RZD, now it owns a stake of 25 per cent. In 2014 Aeroexpress purchased 25 Kiss double-decker trains from Stadler Rail (16 four-carriage and nine six-carriage units). Due to the financial crisis, it reduced the order to 11 vehicles: nine four-carriage and two six-carriage units. These 11 Kiss trains, known in Russia as ESh2 Eurasia, were entered service in 2016. The vehicles initially ordered by Aeroexpress were sold to Azerbaijan (nine units) and Georgia (four units).