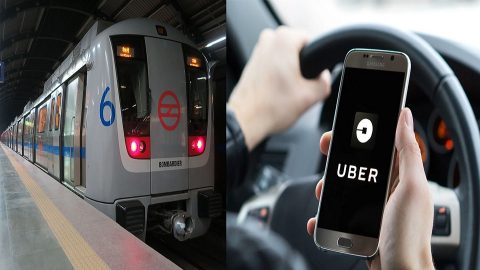 The US-based rideshare unicorn Uber has won a public bid to provide mobility services across 210 stations of Delhi Metro. The company’s application offers the last-mile service for the passengers travelling to or from metro stations across the Indian capital. As a result, passengers will be able to combine their journey by using several modes of mobility.

After successful tests at four stations of Delhi Metro, Uber has extended the new service to 210 of 274 metro stations since 22 October. To use the new option, the customers should open the Uber application and chose the ‘Public Transport’ feature. The latter offers to the travellers fastest and cheapest routes, real-time schedules including departure time for public transportation to and from nearby metro stations.

With the help of a new joint project with Delhi Metro Rail Corporation (DMRC), Uber continues to implement its strategy on the Indian market. “India is core to Uber’s growth strategy for the next 5-10 years,” said Dara Khosrowshahi, CEO of Uber. Also, the US unicorn wants to move further in the integration of various mobility services. “We have also announced in partnership with DMRC a ‘model Metro station’ to showcase future smart mobility solutions and how public transport can be integrated with Uber’s multi-modal vision for urban mobility. It highlights a breadth of first and last-mile options with organized and dedicated pick-up and drop-off areas to complement public transportation,” Uber noted in an official statement.

The Delhi case is not unique for Uber when the company tries to integrate different mobilities. Two years ago, the US unicorn started to test the last-mile service in the French city of Nice. In July 2018 the option began to work on a regular basis and the customers received an opportunity to combine their journeys on trams with the Uber’s ridesharing service. Six tram stops of Line 2 (T2) were included in the company’s application. Uber also launched a similar service in Boston. The customers are able to combine the Uber last-mile option with the city public transport operated by Massachusetts Bay Transportation Authority (MBTA) including metro lines and tram routes.

Besides the joint projects with the public transport operators, Uber also attempts to launch its own public transport solutions. Last October, the company opened the Uber Bus service in Cairo, Egypt. It provides a comfortable connection between the city core of Cairo and its outermost neighbourhoods as well as the adjacent towns. The Uber minibuses are running on several routes, the passengers can pick up them using the company’s application.

The similar service was open in Kyiv, Ukraine, in May of this year. It was branded as Uber Shuttle and also connects the remote neighbourhoods with the city centre of Kyiv. There are some critics of this service because it competes with the conventional city buses, tram and metro lines. Also, Uber uses legal loopholes and launch its buses as irregular in order to simplify the authorisation of its service. Moreover, the company do not invest in the city infrastructure. At the same time, the passengers taking the Uber minibuses should pay more but they get more comfortable and faster trip than using conventional buses.