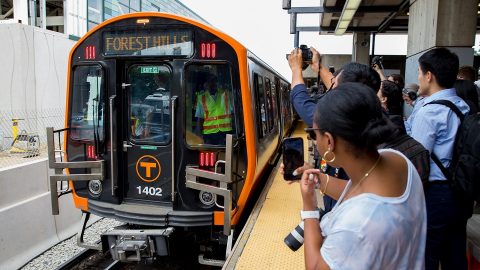 The Massachusetts Bay Transportation Authority (MBTA) has introduced into service the first six-car metro train developed and produced by the Chinese manufacturer CRRC. It runs on the Orange Line of the Boston Subway. By 2022 the CRRC-made units will replace the old rolling stock running on the route since the 1980s.

The first Chinese metro trainset was launched on 14 August. MBTA has scheduled to enter into service the next CRRC-made vehicle this autumn. With the help of the new type, the public transport agency intends to renew the entire fleet on the Orange Line, increase its capacity by 30,000 passengers a day and reduce the interval between the trains from 6 to 4.5 minutes.

“When the entire Orange Line fleet is replaced, it will be able to carry more passengers per hour than ever before, there will be shorter times between trains, and customers will have more confidence that they can depend on public transportation system to get them where they need to go,” said CEO of MBTA Stephanie Pollack.

In 2014 MBTA and CRRC signed an agreement for the delivery of new metro trainsets valued at 1 billion Dollars (circa 898 million Euros). The Chinese company was obliged to produce 152 metro cars for the Orange Line and 252 metro cars for the Red Line. CRRC is assembling the vehicles for Boston Subway at its facility in Springfield, Massachusetts and testing them at the Wellington Yard and Maintenance Facility.