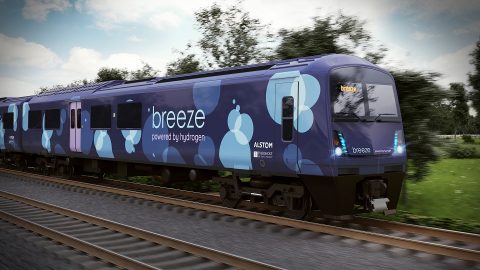 French technology company Alstom and British rolling stock operator Eversholt Rail have presented a concept of the UK’s first hydrogen train. The vehicle is an upgraded version of the Class 321 electric multiple units running the country’s railway lines since 1988. The refurbished train with the nickname “Breeze” will be launched in the UK as early as 2022.

The modernisation of the Class 321 trains will be done at Alstom’s facility in Widnes. By 2040 the government wants to have all diesel multiple units removed from the British tracks and replaced them with hydrogen trains.

“Hydrogen train technology is an exciting innovation which has the potential to transform our railway, making journeys cleaner and greener by cutting CO2 emissions even further. We are working with industry to establish how hydrogen trains can play an important part in the future, delivering better services on rural and inter-urban routes,” the UK Rail Minister Andrew Jones noted.

The Class 321 trains will become the first type of electric rolling stock converted to hydrogen power. Earlier, UK made some efforts to launch hydrogen-powered train, most of them were experimental. It will be the Breeze train to become the UK first regular unit. The Class 321 series were chosen due to their replacing by British railway operators. Several companies withdrew them in the 2000s. Only two carriers, Greater Anglia and Northern, operate this type of trains now.

Besides the UK, the hydrogen ambitions have other European countries. Currently, only Germany has already implemented them by launching the first two hydrogen-powered units in a state of Lower Saxony in September 2018. The trains are the refurbished version of the Coradia Lint diesel sets produced and modernised by Alstom. France has also some plans for hydrogen sets. French national railway operator SNCF is expected to start trials of the innovative trains in 2021 and to launch them on regular lines a year later.