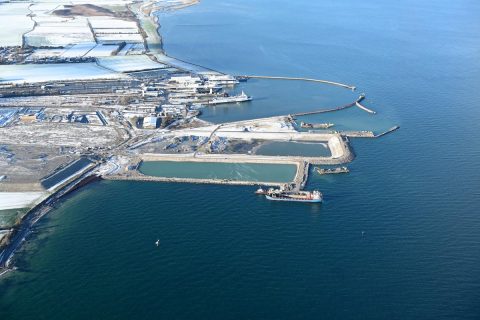 The progress of the Fehmarnbelt tunnel after two years

From dredging works and track tender preparations to controlled explosions, work on Europe’s largest infrastructure project is in full swing. From 2029 onwards, the Fehmarnbelt tunnel will connect Germany and Denmark, taking a shortcut right across the strait. What progress has been made so far and what’s next?

When the Fehmarnbelt tunnel with its electrified railway is completed in 2029, it will offer a shortcut for the transport of rail freight and passengers between Denmark and other nordic countries to central Europe. The rail journey through the tunnel will take 7 minutes by train, avoiding a 160 kilometre detour via the Danish mainland. The tunnel will also accommodate car traffic.

“The facility will not just ensure power supplies, but also comply with our requirements that the tunnel operations will be CO2-neutral following the opening in 2029”, says Jens Ole Kaslund, Technical Director at Femern A/S. This is one of the many tenders involved in the enormous project, and in the first two years of construction, quite some progress has been made.

The Fehmarnbelt tunnel will be an immersed tunnel, securely sited below the sea bed where it is protected against passing ships’ anchors and collisions. The tunnel elements will be lowered into an 18 kilometres long tunnel trench, which is being dredged at sea. Excavation of the tunnel trench is in full swing and is being carried out with some of the world’s largest excavators. At the end of November 2022, approximately 70 percent of the work was completed, measured by volume.

Most of the excavated material from the 18 kilometres long tunnel trench is brought to the coast of Lolland (Denmark) and reused for the large land reclamation areas. A smaller part is transported to Fehmarn and reused there as well. It is used to build for example the ramps for the future bridges on the German tunnel construction site. In this way, natural gravel deposits are spared and transports to the island avoided.

However, before any dredging operations for the Fehmarnbelt tunnel could begin, Femern A/S carefully investigated the area around the tunnel for any unwanted surprises, including explosive remnants of World War II. Indeed, in the spring of 2021, unexploded munitions were discovered in the Danish and German parts of the Fehmarnbelt. Most finds were quickly salvaged and rendered harmless.

Some more planning and effort was needed for an unexploded depth charge of the type D II, weighing 125 kilo’s. It was found on the Danish side of the Fehmarnbelt near the German border and the Natura 2000 area ‘Fehmarnbelt’.

A controlled explosion of a depth charge from the Second World War was successfully carried out on 17 October 2022 after intensive preparations and close coordination with the relevant Danish and German authorities. A so-called bubble curtain was used to keep underwater noise to a minimum. Pingers and so-called ’seal scarers’ were used as acoustic deterrents to keep marine mammals, such as porpoises and seals, away from the affected area. The area was also monitored by whale watchers.

With all objects out of the way, the tunnel is ready to be constructed. The first vessel carrying materials for the construction of the Fehmarnbelt tunnel docked in the harbour of Rødbyhavn on the island of Lolland in Denmark in July 2022. This work harbour has especially been built adjacent to the large tunnel factory where the elements for the tunnel will be produced. After work of Fehmarn Belt Contractors (FBC), consisting of the Dutch construction companies Boskalis and Van Oord, this port became operational in 2022, but is not expected to be fully completed until 2023, when the permanent port offices and technical equipment are in place. The first shipment consisted of 7,000 tonnes of granite aggregate from Norway for the construction of access roads at the construction site.

Because the construction will take years, the construction site has to be well prepared with all necessities, such as water, electricity, and access roads so that it is ready for all of the contractors. In Rødbyhavn, a factory is being constructed which will produce the tunnel elements. Factory halls are being built for six production lines: five for the tunnel’s standard elements and one for the special elements. A standard element will be 217 meters long and weighs 73.500 tonnes. The elements will be cast step-by-step in segments of approximately 24 metres in the factory. Nine segments comprise one standard element and the whole process will take about nine weeks.

When all six production lines at the tunnel factory are in operation, the harbour on the Danish side will receive up to 70,000 tonnes of building materials such as sand, gravel, cement and rebar per week.

Slightly west of the production facility, a large accommodation area will be built for the tunnel workers, together with office and administration facilities. Several thousand workers are needed to construct the Fehmarnbelt tunnel. When the work reaches its peak, around 1,300 tunnel workers will live and work at the site. In the past year, around 750 employees lived in the ‘FLC Village’ at some point. These are primarily foreigners, but also some Danes who work in the construction but live further away from the construction site.

Watch a video of Femarn A/S showing a timelapse of the factory construction for the tunnel parts:

Paving the way for the 200 million railway tender

Although there is a lot of construction work to be done before any start of building the railway through the tunnel can be made, preparations for the railway tender are already ongoing. In the spring of 2023, Femern A/S will put the Fehmarnbelt tunnel’s track and catenary system for electric trains out to tender. The contract is worth around 200 million euros. As a large scale project, it will take some time to weigh the decision, and the winner of the Tunnel Track and Catenary (TTC) contract will be announced in the spring of 2025.

It will comprise a 25 kilometre two-track railway to run trains at 200 kilometres per hour and a catenary system of which 18 kilometres will be located in the tunnel itself and with a total of 7 kilometres outside the tunnel, on the Danish and German sides.

“There has been great interest from potential bidders in having more details ahead of the tender in the spring,” says Kirsten Christensen, Contract Director, Femern A/S, with responsibility for railway installations. “We want, of course, to assist companies in putting consortia together and to tender for the contract. Our main aim is to attract some great and well-qualified competition in the tender phase.”

In May 2022 Femern A/S and the contractor consortium Femern Systems Contractors (FSC) signed the contract for quipping the Fehmarnbelt tunnel with electro-mechanical installations and technology.

As currently, TEN-T “investments”…, devastatingly are “cementing”, at no longer optimal railway standards (and even worse, in no respect resilient) hopefully, at Tunnel, etc., now, “height” is taken for future demand!
(Apart of climatic, now rapid shift at Market, is the new normal.)
All other modes, those duly resilient, upgrade for higher load – and lower costs.
(Current railway standards, no longer are optimal.)
As, at any vitals of society, electrification shall be redundant, etc., etc.