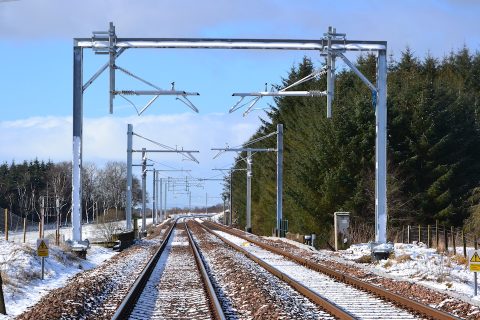 Scotland’s publicly run railway has been given the funding to address electric power supply issues. The injection of 120 million pounds (140 million euros) will help the network reach the Scottish government’s ambitious target of completely decarbonising operations by 2035.

In collaboration with Network Rail, a three-year programme will see radical upgrades to the electricity power supply regime serving Scotland’s railway network. The investment will see six new feeder stations at strategic locations across the network and a further nine sites upgraded to increase the resilience and reliability of the infrastructure for the operation of electrically powered passenger and freight traffic.

The Scottish government has sought to lead the UK in decarbonising the regional economy, with the railway network the most visible part of that strategy. This funding announcement addresses critical issues of delivery, making the network capable of supporting a mainly wired electric service. Challenges currently exists in several parts of the network, where the switch from on-board diesel has been difficult, due to lack of sufficient electrical power supply. Most prominently among these has been the East Coast Main Line out of Edinburgh, where the existing electric infrastructure has been unable to support the intensity of service, forcing some operators to use diesel power ‘under the wires’.

As well as increasing the energy resilience of the existing network, the new connections to the UK’s National Grid power distribution service, via the new and upgraded feeder stations, will increase the overall capability of the 25kV electrified network. Network Rail says this will accommodate future passenger and freight growth and reduce the railway’s carbon footprint by supporting the removal of diesel passenger trains from the network.

The decarbonising of Scotland’s Railway is not a new policy. The Scottish Government has already made clear its commitment to decarbonise the passenger rail network by 2035. The implications are that freight will be part of that programme, insofar as can be achieved with present fleets and technology. This announcement reflects an initial phase of work contract. That contract has been awarded to SPL Powerlines, a company with offices in Coatbridge in Scotland. It has a track record of railway electrification, including the London to Corby section of the Midland Main Line.

“Increasing power supply into the Scottish railway network is critical to enabling our ambitions to run more cleaner and greener electric trains”, said the recently appointed Scottish Government Transport Minister, Jenny Gilruth. “Upgrading the power supply network will enable the introduction of electric trains on services to East Kilbride and Barrhead, on the Borders line and across Fife but will also support increased traffic on existing routes such as the East Coast Main Line”, she said.

Campaigners have welcomed the news that rural services, such as the Borders Railway, will eventually see electrification. There has been criticism that new build projects, such as the link between Edinburgh and Tweedbank, were not electrified from their inception. “We want a rail infrastructure for Scotland that helps to cut emissions, to provide sustainable travel options for people and for freight, and which provides fair work and highly skilled employment opportunities”, added Gilruth.

Alex Hynes, who seamlessly stepped from the private sector Abelio-run franchise to become managing director of Scotland’s Railway under the new public-sector regime, explained the necessity of the investment programme in delivering reliable power supply to the railway. “In tandem with the Scottish Government’s ambitions to increase the number of electric trains running on Scotland’s Railway, there comes an increase in the demand for power to operate these services”, he said. “Investing in the power supply infrastructure will not only make the current electric network more resilient, it also delivers the significant growth in capacity needed as we continue to electrify our railway. Introducing quieter, quicker and greener electric trains on more routes across the country will enable both passengers and lineside communities to experience all the benefits that electrification of the rail network brings.”

The first phase of the investment will see six new feeder stations and nine upgrades to traction power infrastructure locations on the railway across the central belt, Scottish Borders and Fife. Work delivered will include a mix of feeder stations which provide the interface between the railway and national grid; and track sectioning cabinets which regulate the power supply between various sections of the electrified rail network.

Upgrades to the power supply network are now underway and will be ongoing until 2026. The Scottish Government has been pragmatic about delivering net-zero carbon railway services to the remote, less populated parts of north and west Scotland. In a tacit admission that electrifying the lines to emotive but remote communities – such as Oban, Kyle and Thurso – would be too expensive at present, they are pushing ahead with battery and hydrogen technologies, at least in the interim.

2 comments op “Scotland given the power to electrify railways”

Who is providing the “injection” of 120 million pounds?, UK Government / Scottish Government or Network Rail directly?

Full Railway Network Electrification is AMBITIOUS!!??
It should be the SOP of every government Globally to electrify all existing and new lines by 2025.
There is nothing ambitious in the expectation of 100% electrification by 2025.
Ambitious would be to say, all railways by the end of 2022!