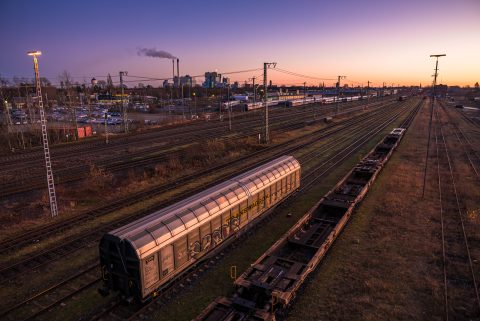 A new wave of construction works on the German railway network has started. According to DB Cargo, this results in capacity restrictions of 25-30 per cent. Trains are reported stranded, while others have had to cancel planned departures. It is the start of a longer period of disruptions that will take place this year.

It is no surprise, but yet an extremely uncomfortable situation. DB Netze is carrying out construction works at several locations on the German network this year. Most impacted are the Rhine-Alpine and Scandinavian-Mediterranean corridors, where long-term works are taking place throughout the entire year.

More intensive construction works started halfway May. On the Rhine-Alpine corridor, these last until half-June. On the Scandinavian-Mediterranean corridor, they last until the end of September. DB Cargo describes these periods as periods when “service disruption and reduced network availability should be expected as the norm”.

Although the schedule was communicated to the customers, the industry is having difficulty coping with the situation. In a video message to employees on 14 May, DB Cargo board member Ralf Günter Kloß explained that in his almost 40 years at DB Cargo, he had never experienced a situation like this. Kloß said that despite the measures taken by the operator, it can hardly control the measures.

The operator announced on 19 May what it was doing to handle the situation. Among the measures were an additional hire of 25 locomotives, with possibly another 15 in the coming months, as well as up to an additional 100 locomotive drivers and 100 other operational staff. But ​​but the management is now reaching its limits when it comes to requisitioning additional workers, Kloß explained in the video.

Deutsche Bahn CEO Richard Lutz spoke about the situation in a press conference Monday morning. “The current operational situation shows, both clearly and painfully, that we have a dilemma that can hardly be resolved in the short term: growing and modernising at the same time is no longer possible with good operational quality and punctuality on too many days and in too many corridors”, he said.

The construction works were described as the new normal by Hupac at its annual event in Lugano on 13 May. The rail freight sector needs to adjust to this reality in order to reduce the impact, said CEO Michail Stahlut. Also Hupac is investing in additional resources and structural reserves.

“The main purpose of such investments, is to be able to provide a constant flow of traffic, which is not as heavily impacted by deviations as is the case right now. These deviations will continue to take place, or intermodal volumes may increase. Also in such a case, it is good to be able to provide constant flows. We need to be more creative, and we need to share the burden with everyone.”

Large operators are doing everything they can to compensate for the limitations and to maintain their clientele, but the impact on the customer is probably difficult to avoid. The Federation of German Industries (BDI) wrote a position paper on 26 April, ahead of the current wave of construction works but after the intensive month of disruptions in May. It is turning to the German government for support.

“The federal government and the rail sector must realise that there is a limit to capacity restrictions resulting from construction activity on the network. When these limits are exceeded, the attractiveness of rail as a mode of transport, especially for the existing customers, will suffer short-term damages. The political goal of achieving a 25 per cent modal split for rail, which is already very ambitious, will be destabilised.”

Some of these disruption coincide with a 9-Euro-bargain for monthly tickets in June to August, and with the peak travel season.

Which routes are menat by the “Scandinavian-Mediterranean corridor”?

Renovation, hm…, A decisive upgrading is the requested! A raised market share with 50% at freight rail, will call for added capacity and added utilisation at existing assets, contemporarily with an ensured punctionality..
Regardless if “predictive” or not costly maintenance as currently no longer is afforded, if track charges sustainably shall be reduced, etc.
“Cementing” – renovation is nut sufficient! A New Old Railway now is requested!