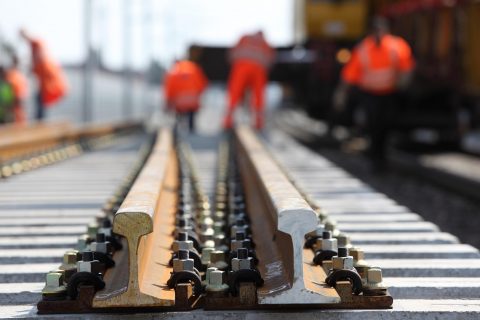 How can rail infrastructure become circular?

A large consumer of resources, the rail infrastructure sector has the challenge to become circular to further reduce emissions. UIC took it upon itself to research this and provide an inventory of practices and support infrastructure managers and other rail companies.

Railways are known to be a sustainable mode of transport, especially in terms of operations and compared to road or air transport. However, the needed infrastructure uses a lot of resources like steel and concrete. To assist in making the system more circular, the International Union of Railways (UIC) launched the REUSE project in 2019, of which the final report is now presented.

The project addresses the challenges associated with the scarcity of natural resources, as well as management of waste, waste flows, end-of-life materials and related emissions and pollution in the coming decades.

Until recently, a large amount of effort was focused primarily on reducing greenhouse gas emissions by switching to green energy. Still, studies indicate that relying solely on energy efficiency and switching to renewable energy will only address 55 per cent of global emissions. It has been indicated that by adopting circular economy principles, we can reduce a significant proportion of the remaining 45 per cent, according to a study by the Ellen MacArthur Foundation.

As a case study, the report mentions that SNCF Réseau has established a task force of 10 people devoted to a Circular Economy strategy. Their aim is to come up with a strategy towards achieving the strategic goal to reuse or recycle 100 percent of main rail components by 2025. This includes rail, ballast, wooden and concrete sleepers and copper wires.

UIC’s research, in the form of 16 structured interviews, was conducted among railway stakeholders, representing 12 businesses from 11 European countries. Researchers from the Slovenian National Building and Civil Institute (ZAG) were commissioned to draft the report and help conduct a workshop that was held in April.

The concept of green public procurement (GPP) is outlined as one of the significant enablers of the Circular Economy. It is an alternative to traditional “money-first” procurement. Via this method, goods, services and works that have a lower environmental impact throughout their life cycle than goods, services and works with the same primary function that would otherwise be procured. Both literature review and the survey results of UIC indicate that the price, unsurprisingly, is most often the key deciding factor in the procurement decisions.

ProRail, the Dutch Infrastructure manager, has found a way to justify higher costs versus lower environmental impacts through making a monetary valuation of the environmental impact in the bid evaluation. The Environmental Cost Indicator (ECI) is a helpful tool to achieve this. This indicator is used in a tool (DuboCalc) to calculate the environmental costs of project, which become a factor in the tendering process. The tool was first used by the Dutch highway authority administration, but it has since then been adopted by the railway operators.

Several examples and best practices of how railway materials can be recycled are shown. Deutsche Bahn said that ballast can be recycled and returned to the existing track network. In 2020, 515,000 tons of ballast were recycled in Germany, corresponding to a total of 16 per cent of all installed ballast. Grains that cannot be reused are sorted out and sold to be recycled elsewhere, for example as aggregate in road construction. Grit is also processed in formation and frost protection layers.

Next to recycling materials from railways itself, using recycled materials such as plastic for new objects is also gaining more attention. Trains in Wiltshire in the United Kingdom are now running on top of old bottles, food packaging and other unwanted plastics, formed into new railway sleepers, as shown in the image below. Network Rail installed the sleepers ahead of a ban creosote-treated softwood sleepers, which can release harmful substances to the environment.

ProRail reminded UIC about the market size differences. They indicated it would be a good idea to have a common European market, especially for smaller and more expensive specialized parts. However, because some elements are not standardized, even a small technical detail can lead to them being incompatible and thus not suitable to be exchanged among countries. For example, there are small differences in sleepers that prevent the use of used Dutch sleepers in Germany.

It is clear that to switch to an entirely circular economy model, no company or sector can work alone, says UIC. The railway industry must work together to break down barriers to material reuse, cross borders between operator and infrastructure managers, tenants and landlords, clients and supply chain and with other sectors and industries.

Information technology (IT) can play an important role in making the system circular. The idea behind digitalisation is to establish centralised systems that can track the journey of assets, record the assets material composition, keep track of asset ownership, and monitor the condition of assets.

For example, Network Rail uses the SURPLUS app, an internal circular economy app which allows users to find assets which are no longer required in one area of the business and re-use it in another area of the business. Users can sell unwanted items to other Network Rail sites allowing them to be reused rather than sent to landfill. Since launching in January 2019, over 470 employees have trialled the app. This creates cost efficiency for Network Rail and removes the requirement for new, excess assets to be sent to landfill.

Another important best practice that was pointed out in several interviews is the practice of renting instead of buying. The idea behind this model is to provide a means to give an incentive to the suppliers to provide products with a longer lifespan.

Would you like to receive the weekly newsletter of RailTech? Please fill in your email address here: