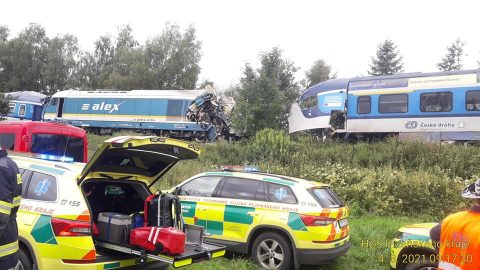 Two passenger trains in the south-west of Czech Republic clashed on Wednesday morning. Authorities say three people were killed and nearly 40 were injured in the head-on collision near the village Milavče in the Pilsen region.

The accident happened after 8 ‘o clock in the morning, says the Czech fire brigade. The killed victims were the two train drivers and a female train passenger. According to the fire department, at least eight people are seriously injured, five people are slightly injured, and 50 people are unharmed.

Rescue workers said they have found numerous victims at the accident site and are evacuating the injured and other travelers. Pictures show that the front of one of the trains is entirely destroyed.

The trains collided at Domazlice, near the German border. Czech Transport Minister Karel Havlicek called the incident very serious and went to the site of the accident. He said on twitter that the Ex 351 train passed a signal in the Stůj position in the Radonice turnout in Domažlice and collided with a passenger train.

One of the two trains was an express train from Munich to Prague operated by the private company Die Länderbahn. According to German media, German rescue workers from the region also provided assistance, including a rescue helicopter from Regensburg.