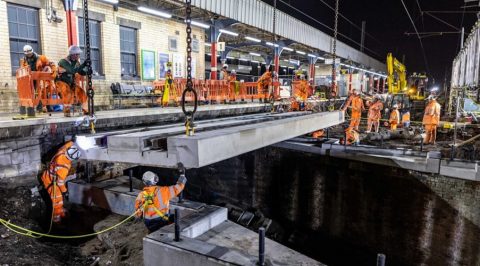 Network Rail has completed a range of essential upgrades to the railway between Euston, the Midlands, North West and Scotland over Easter. Between Friday 2 and Tuesday 6 April, teams carried out vital work on the railway to improve passenger and freight services on the West Coast main line – the Backbone of Britain for 35.8 million euros.

The 31 million pound investment across the whole of Network Rail’s North West and Central region as part of Britain’s Railway Upgrade Plan. Part of it were ongoing works to upgrade Birmingham New Street station’s signals, the system and traffic lights of the railway which keep trains running safely. Additionally, works to prepare Euston station for Britain’s new high-speed railway, HS2 were carried out.

Two underpasses were driven underneath the Chiltern main line in Bicester. Over a 100 hour railway closure between 2-5 April, railway lines were ripped up and 21,000 tonnes of railway embankment were removed. Then, two prefabricated underpass structures, with a combined weight of 2,100 tonnes, could be slowly driven into the new gaps by a transporter vehicle.

A footbridge outside the station was also upgraded and a disused bridge span was filled in. These works meant that trains weren’t able to call at the station. Remaining work at Warrington Bank Quay station will cause minimal disruption to passengers and is due to be finished by the end of April 2021.

Paving the way for HS2

“Hundreds of frontline staff worked throughout the bank holiday to improve journeys for passengers and freight in the North West and Central region”, said Tim Shoveller, managing director for Network Rail’s North West & Central region. “This is just the start of 2021’s work to make the West Coast main line more reliable for our passengers and pave the way for HS2. This will bring much-needed extra railway capacity.

“Now our attention turns to the early May bank holiday when more essential railway improvements will take place. Because of the amount of work being done, passengers are being urged to travel either side of the bank holiday on Friday 30 April and Tuesday 4 May.”