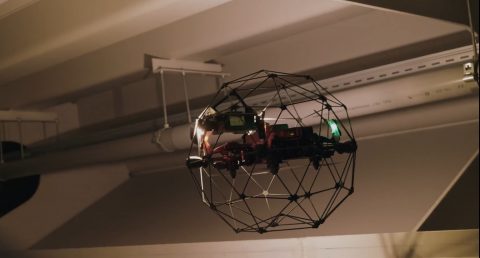 Dutch national railway operator Nederlandse Spoorwegen (NS) will carry out maintenance inspections at stations using drones. Last month a successful test flight took place at Utrecht Centraal station and in the Moreelse Bridge over the rail track in Utrecht. According to NS, the use of drones causes less nuisance for travellers, leads to lower costs and ensures inspections are completed faster.

The Dutch railway operator has recently received permission to carry out professional drone flights on the inside of the station and other buildings. In time, new European legislation will make drone flights in urban areas possible. This new legislation will allow drone inspections of train stations and platforms.

Remco Bunder and Sep Schetters are the first NS drone pilots to operate the flights. “Stations and other buildings are inspected annually for damage and wear. These inspections must be carried out precise and safe. Nowadays this often happens with scaffolding and scaffolding. I noticed this was very time consuming, so I thought: we can do this in a more efficient way,” Bunder said. His colleague Schetters added: “The advantage of drones is that we do not have to work at heights and can, therefore, do our job more safely. In addition, travellers have less inconvenience because fewer fences are needed at and around the station.”

The drones make photo and video recordings of the inside and outside of station buildings. “As drone pilots, we received specific work instructions. We explore the area beforehand, block the inspection area and indicate with signs that recordings are being made. If during the flight it appears that there are people on the photo or video footage, these recordings will be deleted or the people will be blurred. The images are then stored in a well-protected environment,” Remco Bunder explained.