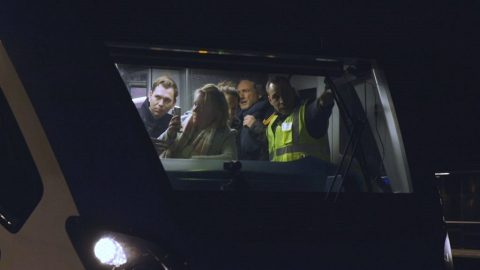 ‘Combination of persons and technology important for ATO research’

“We want to investigate how we can strengthen the combination of persons and technology with the help of Automatic Train Operation, so that we can make a leap in even better execution of our timetable,” said Luuk Kessels, project manager at Nederlandse Spoorwegen (NS), after a successful test drive with ATO on the Hanzelijn.

The human factor is an important theme in the research of the Automatic Train Operation technology, says Kessels, who is responsible for train technology, exemption and test execution at NS. “In these experiments, we opted for Grade of Automation Level 2, so with operators. We mainly want to investigate what effect the ATO could have on the capacity of rail and energy-efficient driving.”

On the night between 10th and 11th December, NS carried out the first test in which a Sprinter New Generation (SNG) produced by the Spanish train manufacturer CAF drove over the Hanzelijn. The Sprinter was equipped with ETCS in combination with ATO, also from CAF. “We are currently working with CAF because we have a CAF platform with an ETCS unit onboard the train. For a possible subsequent phase, it will be checked again which supplier is the most suitable for carrying out tests.”

“During the test, we have investigated whether a train equipped with an ATO system can brake in time, provide traction and precisely halt in a place that is ideal for the traveller. The moment the passenger can board the train immediately, this also has a positive influence on the timetable. ”

“We departed and arrived on time. And we were able to maintain this performance during the night,” says Kessels. In addition to braking on time and stopping at a platform, NS and CAF also looked at the impact of ATO on energy consumption.

The experiment also allowed both partners to collect data about unmanned operations. “The ATO system algorithm reacted as we expected. The data from this first experiment will be studied further in the coming period.”

NS will conduct follow-up tests in January 2020. “In a subsequent test, we will drive more journeys along the same route in order to make a good comparison with a regular train service. This makes it possible to link more valid conclusions to the tests and determine whether the expected benefits of ATO will actually be delivered. ”

“The advantage of testing in January is that we are dealing with slippery traces, whereby we can also include the reaction of the ATO system in the results. It is important that we gain experience with this because we also want to continue to run exactly according to the timetable during a period with smooth tracks.”

In addition to testing the ATO system’s response to smoothness, NS wants to add other operational functionalities to the test program. “For example, it is interesting to investigate how ATO works with temporary speed restrictions or to respond to a virtual level crossing that we pre-program on the route on the Hanzelijn,” explains the ATO expert.

“During the tests, we will sometimes consciously choose to let the train start with a delay to see whether the algorithm is then able to run according to plan as quickly as possible.”

Whether and on which routes ATO will be rolled out in the future, according to Kessels, is not yet certain or decided. “Depending on the results of the experiments, we investigate what ATO could mean for NS. But at the moment we are still focusing primarily on researching the technical possibilities of this system in relation to our people, processes and capacity on the track.”