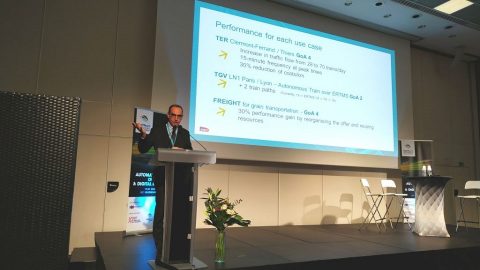 ATO as the magic bullet for shortage of track capacity

“Almost everywhere in the world, there is a shortage of capacity on the rail network. We desperately need Automatic Train Operation to tackle this shortage. It’s not a question of can do or want to, but must,” argued Luc Laroche from SNCF during the Intelligent Rail Summit 2019. Laroche is in charge of all ATO projects for the French rail operator.

According to Laroche, the rail sector is in an ostensibly favourable position because it is one of the most obvious ways to achieve climate targets. “In the coming years, demand for rail is going to grow enormously.”

Laroche was one of the speakers during the first day of the rail summit in Paris. SNCF is currently working on tests with the regional train between Clermont-Ferrand and Thiers and the TGV from Paris to Lyon. For the regional train, SNCF has calculated that with automation grade level 4 (GoA4), the number of trains can be increased from 25 to 70 per day and 15 minutes can be shaved off the journey. In addition, costs per kilometre can be cut by 30 per cent. In terms of the TGV, there are currently 13 per day between Paris and Lyon. With ERTMS on board this can be increased to 16, and if ATO GoA2 is added it is possible to run 18 trains per day. For freight trains, the introduction of GoA4 will mean 30 per cent higher profits through the more efficient deployment of rolling stock and adjustments to what is being provided.

In his introductory presentation, TU Delft Professor of Railway Traffic Management and Operations Rob Goverde summarised the objectives of ATO, which are around capacity, functionality, energy-saving and flexibility. Alongside this, Goverde discussed the differences between metro lines and railway lines, including the higher frequency, the shorter stops, the fixed, regular timetable, the simpler structure of the rail network, the closed system and the fact that only one operator uses the infrastructure.

In the interactive panel discussion that followed Goverde’s presentation, one of the discussion points was the human aspect of ATO, such as how you ensure drivers stay alert despite no longer being fully in charge of driving the trains. As it stands, Richard Plokhaar from Ganett Fleming, Sebastiaan van der Zee from Alstom and Pavel Popov from Russian Railways cannot anticipate any problems in this regard. Especially on journeys with many stops, which are seen by many as the most obvious application for ATO, drivers will stay focused, given that in almost all grades of automation where there is still a driver on board, the doors are operated by hand. The panel also touched upon the issue of who is responsible if there is an accident – the rail operator, the train manufacturer or the supplier of the ATO system? However, they did not arrive at an answer to this.

Yvonne Dubben, Development Manager at Arriva, explained to the IRS attendees why her rail operator is carrying out ATO tests in the north of the Netherlands. “The limits of our capacity have been reached, and there are no possibilities for increasing capacity in the foreseeable future. We can’t make the trains longer, because the platforms can’t be made any longer. Building more infrastructure is very expensive and takes a great deal of time. With ATO we see the possibility of making trains run closer to each other and perhaps adding an extra train to the timetable.”

Stadler developed a system for Arriva’s FLIRT trains, and Arriva signed a partnership agreement with the Province of Groningen and ProRail in order to test it. This agreement was signed in March 2018 and the first test took place a year later. Arriva expects to publish the results in the first quarter of 2020. “We wanted to quantify all the assumptions about ATO, including increasing capacity, punctuality, energy-saving, maintenance costs and safety, but also to see to what extent passengers experience more comfort on self-driving trains.” Especially this latter aspect has been little tested, stated Dubben. “The emphasis has mainly been on the technological side.”

Arriva is closely involving its train drivers and the trade unions in all processes around ATO in order to foster engagement and understanding. “We are not aiming to remove drivers from the trains. With the tests, we are studying the extent to which their work is changing and what sort of training is necessary. Especially the younger generation understands that this is the direction their jobs are heading and they are actually very interested in the developments. The drivers who are participating in the tests are sharing their experiences with their colleagues.”

Pavel Popov from Russian Railways gave a report on the great steps forward that the Russians are making in a short period of time with the development and introduction of ATO. Tests on a freight train controlled remotely were first done in 2017, and this year the first journey of a self-driving passenger train took place, close to Moscow. The country is in a rush because RZD wants to introduce the first self-driving passenger train into service in 2021. In Russia, instead of having a driver on the train who can intervene if necessary, the main focus is having a driver in the control centre who can take over the driving from there if the situation so demands.

The train itself is equipped with six cameras, an infrared camera so it also possible to see well in bad weather, and two Lidars. The localisation is based on a combination of satellite navigation and algorithms that are built up through machine learning. “Among other things, we are using datasets from the automobile sector. The right datasets are the cornerstone of machine learning.” According to Popov, the biggest challenge is to have an answer to all weather and traffic conditions. “We solve most problems with simulations, and we’re also testing with dummies which are being used as pedestrians or cyclists, for example. In the automobile industry, they work with moving dummies to test autonomous driving systems, and we are currently developing a variant of this that is suitable for the railway. It’s a bit more difficult than a dummy that moves on a flat road, as we have to deal with the track, ballast, sleepers and uneven crossings.”