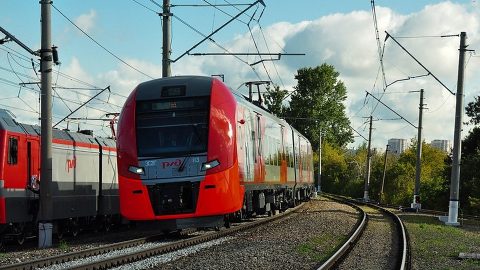 ‘Main challenge for ATO is to overcome the false detection’

Several EU countries have tested the Automatic Train Operation (ATO) during the last years. The similar trials are being carried out by railway operators from other states. In late August the self-driving Lastochka passenger train made the first run in Russia on the test ring in Shcherbinka. Pavel Popov from JSC NIIAS, a research subsidiary of Russian Railways, is a technical leader of the development team that is working on this project. He talks to RailTech about his experience in implementing ATO.

“The main difficulty for testing the automated Lastochka train on the Shcherbinka railway test ring was run on a circle with limited vision due to curvature. This complicates the trials. Nevertheless, we are happy with obtained results,” Pavel Popov says. He works at the Research and Design Institute for Information Technology, Signalling and Telecommunications for Railway Transport or simply knows as JSC NIIAS. The organisation is a subsidiary of Russian Railways that provides researches and enter service the innovations including ATO. For 11 years, Mr Popov is working on researching, developing and implementing the ATO solutions in Russia.

The Lastochka self-driving train is the first automated passenger train ever being tested in Russia. “This project started in 2017. However, the train itself was equipped with sensors, cameras and other solutions only this summer,” the expert explains. At the same time, the Lastochka self-driving train was not the first unmanned rail vehicle in Russia. Starting from 2015, JSC NIIAS is performing the other project – testing the automated shunting locomotives. “The first unmanned shunting locomotive was launched at the end of 2017. Since that time, we gathered the huge data and applied them for the Lastochka project,” he recalls.

Currently, there are three shunting locomotives of type TEM7A equipped with unmanned technology. They are running at the hump yard of the Luzhskaya railway station (it is a part of railway junction in Ust-Luga port located on the Baltic Sea). “The locomotive drives up to the wagons, couples, pulls and uncouples them. All these operations are made without the participation of a human being. The vehicle is operated by the dispatcher remotely,” Pavel Popov specifies. He also hints that other types of locomotives will be equipped with unmanned technology in the coming future. To this end, Russian Railways is talking with Sinara Group and Transmashholding, two major rolling stock manufacturers in Russia.

During the test runs of the Lastochka train, the development team has faced several challenges. Compared to the shunting locomotive, it has a higher speed and, as a result, requires higher range detection. To meet this, some technical improvements have been made. However, the experts have another question to be addressed. “The main challenge for the automated trains is to overcome the false detection. Now, we are working on removing the false detection,” says Pavel Popov. According to him, the development team continues the tests. It performs the trials on the test tracks and on simulators. For November, the new stage of tests is scheduled. It will be devoted to examining the braking and stopping of the Lastochka train in various conditions including the night runs.

After the trials, Russian Railways (RZD) intend to introduce the Automatic Train Operation using the Lastochka vehicles on the Moscow Central Circle. “CEO of RZD Oleg Belozyorov has set a target to introduce the unmanned trains on the Moscow Central Circle by 2021. The decision on the further extension of the automated vehicles will be made taking into account the results of this project,” Mr Popov specifies. He also adds that the implementation of the ATO requires some amendments to the state standards and regulations. The special roadmap has been adopted to address this question.

The other challenge is the future of a train driver. Pavel Popov believes that this profession will turn into the new one. “I think that the train drivers will be converted into the operators that will be able to control up to 10 trains simultaneously,” he says. To this end, the development team is training the future staff for operating the automated trains on the Moscow Central Circle. A special control centre has already been constructed at Andronovka railway station. It will be used by potential operators. Also, the functions of the operators will be different in comparison to the train drivers. “Currently, we are working to define the functionality of the operators. First of all, he or she is needed to eliminate false detection. For instance, if a small branch falls on the tracks, the system considers it as an obstacle and stop the train. The task of an operator will be to analyse this obstacle and decide whether the further move is safe or not,” Pavel Popov explains.

Do you want to know more about Russian experience in implementing the Automatic Train Operation (ATO)? Pavel Popov will deliver a presentation at the Intelligent Rail Summit 2019 that will tale place from 19 to 21 November in Paris, France. The event programme is available here.