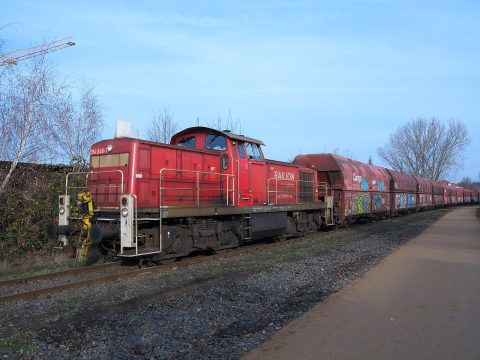 How can railways phase out diesel from their operations?

HVO fuel and a future hydrogen combustion engine will both play a role in reducing rail emissions. “We can replace old vehicles with new sustainable trains, however we also need to do something to reduce the carbon footprint of existing vehicles running on diesel”, said Sittipan Reinold, Program Lead Diesel Exit Rail at Deutsche Bahn during the latest RailTech webinar on reducing rail emissions and shifting to alternatives for diesel.

Reducing current emissions for existing diesel trains is at the core of DB’s Diesel Exit programme, which was launched this year. “As DB forwarded its climate neutrality goal from 2050 to 2040, this means it’s only 18 years left, which in terms of railway innovation cycles is a very short time”, says Sittipan Reinold.

One of the ways DB wants to reduce the emissions of operations, is by switching to HVO fuel, which stands for Hydro-treated Vegetable Oil. “HVO is a biofuel made out of waste and residuals of raw materials. Because it does not have a fossil origin, and green electricity is used for the production, the CO2 emissions of the HVO fuel we buy are 90 percent lower than for diesel, and has certificates to guarantee it is the greenest HVO and is palm oil-free.”

The main advantage of HVO as a biofuel is that it is a ‘drop-in fuel’. “You can take out diesel from the vehicle and put in HVO and the train is running, there is no need to adopt anything on the train.” DB tested it first in its Advanced TrainLab, and started in January with the implementation of the fuel in its operations. Since July 2022, the shuttle trains which carry passenger cars to the northern Germany island Sylt run completely on HVO, which are around 10 vehicles. They are fuelled by a converted filling station. A regional fleet in Baden-Württemberg also runs on HVO since recently.

Freight subsidiary DB Cargo took a big step in approving all their diesel engines in Germany for the use of HVO. “Every DB Cargo vehicle is now ready to use HVO, and the question is only: how fast can we convert refilling stations?” There are currently just three refilling stations for HVO in Germany, but more are coming. 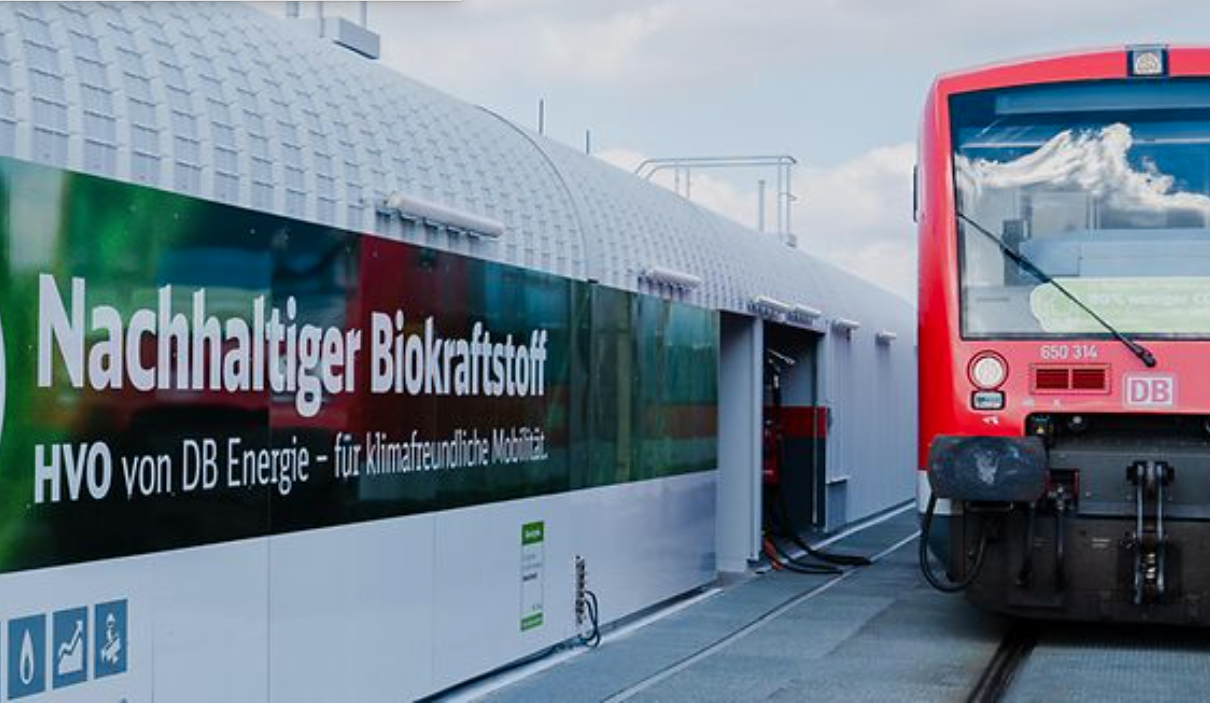 However, is there enough HVO available to fuel all operations of DB? “In Germany, DB is consuming about 250 million liters of diesel”, says Reinold. The overall HVO production capacity in 2021 reached around 4 billion litres. DB estimates that there will be enough green HVO for at least all their own operations, and also for other market participants. All current HVO operations can be fueled with the high green standard HVO. According to their estimations, the amount of HVO with the greenest label is not yet at the level which is needed for all DB operations, but this will go up with the growing demand and should be sufficient with the gradual conversion of refueling stations.

The role of hydrogen

While HVO fuel can play a role in reducing emissions on the shorter term, the eyes are often on hydrogen to realise fully net-zero emissions in the future, also for rail. The current hydrogen drive available for trains – the hydrogen fuel cells –  might not be the answer to everything. “For retrofitting a train with a diesel mechanic engine, you would have to electrify the whole powertrain of the car, so we were looking into other possibilities and other technologies for retrofitting our existing trains. We see hydrogen fuel cells mainly as a solution for new trains”, says Reinold.

According to Reinold, there is currently still a technological gap in alternative drives for trains. “For heavy haul traffic, fuel cells have their limitations when it comes to performance. So we were looking into hydrogen combustion engines because you have the same or at least almost the same performance.” For this reason and for the case of retrofitting, DB is also looking into the possibilities of hydrogen combustion engines, which burn the hydrogen fuel in a similar manner as diesel engines burn fuel, but without the CO2 emissions. These types of engines are however still in development. “The main advantage is that you could actually use the same existing engine, with some modifications. This is less complex than electrifying the whole powertrain which is necessary for the use of hydrogen fuel cells.”

However, it will take some time before this hydrogen engine is operational for trains. “It would take around 5 or 6 years to have a pilot project, and after that we can look at implementing it for a larger fleet”, says Reinold. Therefore, again the HVO would take an important role in reducing current emissions, because some of the technological developments still need to be developed further. Also, it is not always economically feasible to invest millions of euros in hydrogen fuel cells or batteries if that vehicle will go out of service in a few years, while HVO can be used in the final years of diesel trains to still reduce emissions.

In the railway sector there is a big interest in the hydrogen combustion engine, sees also Frederik Wewetzer, Programme Manager Hydrogen and Fuel Cells at Now GmbH, a German federal organization that helps the government to coordinate and prioritize funding for technology and innovation in the area of ​​sustainable mobility and energy supply. “However, in Germany, the political strategy is to focus on hydrogen fuel cell technology. Especially for retrofitting, the interest of the industry for a hydrogen combustion engine for trains is huge and we should definitely take it into account for retrofitting diesel trains.” 36 percent of railway operations or 244 million kilometres of the large German network were operated with diesel traction in 2017.

In general, the source of the ‘sustainable’ fuel plays a large role in the final emissions, also for hydrogen, says Marko Kapetanović, who did a research study to calculate the CO2 emissions of various options of alternative drives for an Arriva railway line in Groningen, the Netherlands.

The trains in Groningen are diesel-electric trains with a hybrid system, so if they would be converted to an internal combustion engine running on hydrogen, it would even result in an increase of the greenhouse gas emissions compared to the diesel vehicle, if grey hydrogen would be used, which is produced with natural gas or electrolysis with grey electricity.

“The savings for these hybrid systems is mainly due to improved fuel economy, where fuel consumption is reduced due to the existence of the energy storage system which uses for example the braking energy, and in combination with the fuel production emissions, this results in the higher emissions in this case”. In this case, hydrogen fuel cell technology or a conversion to battery drive would be a good option, which for the line studied would result in similar reductions of both around 95 percent in life-cycle emissions.

The fact that electrification has a high price and a long planning and execution time of up to 20 years is the main reason that other options have benefits, explains Kapetanović. “The transition to for example hydrogen is a relatively fast process that can be achieved in a shorter period, and thus can reduce emissions in the shorter term.” However, the choice for which diesel alternative depends on many factors, and for each railway line, the consideration taking into account the emissions and feasibility is important to shift to a sustainable operations.

Watch the replay of the full webinar by filling in the form here. For more on alternative drives in rail and the surrounding infrastructure, join the Rail Infra Forum on 15 and 16 March 2023 in Rotterdam and online.

1 comment op “How can railways phase out diesel from their operations?”

With all respect, with or without diesel, already, by far railways is the most energy effective on shore transport device!
(DB and Industry has got bigger, acute, serious problems, than diesel, to attend!)
Infrastructure already is short of capacity, hampered by “state of the art” techniques, since long due, for the needed shift.
(Disturbings is Problem, that, for sake of clients and for Industry, urgently have to be outed!
Electrification, as currently, is not sustainable, etc., etc.)