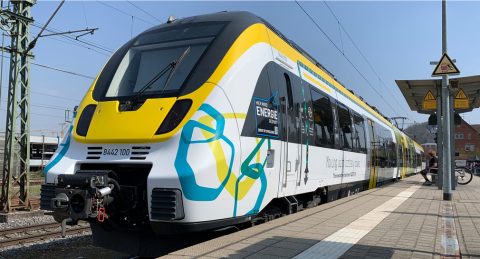 After studying the various options, the transport ministry of Baden-Württemberg will no longer consider hydrogen trains, and finds battery-electric vehicles as the best, and mainly the cheapest solution.

The state and research partners examined a total of 16 non-electrified route sections for the use of locally emission-free rail vehicles. In most cases, battery hybrid trains turned out to be the best solution.

Transport Minister Winfried Hermann: “In order for the country to achieve its climate targets in the transport sector, diesel drives must be a thing of the past on the rails as soon as possible. Since the construction of overhead lines takes a long time and is sometimes very expensive, trains with alternative drives are the method of choice on some railway lines. The study provided valuable insights in this regard.”

Hydrogen did not convince

In the analysis, three types of drives were examined by Transport Technology-Consult Karlsruhe GmbH (TTK), Komobile GmbH from Vienna and other partners. Battery-electric multiple units (BEMU) powered by electricity from a battery, which is recharged on sections of track with overhead lines, hydrogen fuel-cell trains, which runs on power generated by hydrogen on board and is converted to electrical power, and conventional electric trains which are powered by electricity from the overhead line, and need electrification of the entire route.

Economic aspects were decisive for the evaluation. Production costs, maintenance costs, the energy requirements of the vehicles and CO2 emissions were examined and taken into account in the evaluation. Also additional strategic aspects, such as closing the gap between existing routes with overhead lines, possible function in freight traffic or the option for diversion traffic were taken into account, says the ministry.

Hydrogen fuel cell trains will no longer be considered in the near future for the lines in Baden-Württemberg, for various operational and economic reasons. In a direct comparison, it “was not able to assert itself on any of the examined routes, also due to the characteristics of the infrastructure and operation”, says the transport ministry. However, several tests with hydrogen trains are still planned within the state. On the Nagoldtal railway, one hydrogen train of Siemens will do test runs in passenger service in 2024 in cooperation with Deutsche Bahn, as part of a research funded by the National Innovation Programme for hydrogen and fuel cells (NIP). Earlier this year, also tests with the Alstom hydrogen train were carried out on the Zollern-Alb railway.

All 16 examined routes are clustered into six subnetworks, and for half of them, battery trains are recommended. For the other three, the best and most economical option would be full electrification. An overview of the lines and the best found drive option has been made in a map by the ministry.

Regions in the state can contribute and take a position on the recommendations of the report, and the full strategy will be decided around the beginning of 2023.

23 Siemens Mireo Plus B trains are already ordered by operator SFBW for operation in Baden-Württemberg, which was Germany’s first technology-open tender for locally emission-free trains. They will run on the Ortenau/Hermann-Hesse-Bahn, and the first units will be delivered in August 2023. Operations are expected to start in December of the same year. On the Gäubahn, tests with the Alstom Talent battery train were carried out earlier this year.

The developments in sustainable rolling stock and the surrounding infrastructure to phase out diesel are central at the Rail Infra Forum on 15-16 March 2023 in Berlin, Germany. Click here to take a look at the programme.