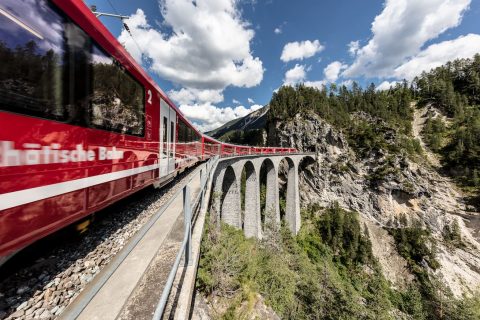 Attempting to assemble and run the longest passenger train in the world is not without challenges and obstacles, Swiss operator Rhaetian Railway (RhB) said at a press conference on Wednesday. Among other things, it will require special training, software and communications system, RhB highlighted.

The record attempt is planned for October 29 to mark the 175th anniversary of Swiss operator SBB. RhB aims to assemble 25 Stadler ABe 4/16 ‘Capricorn’ units for a total train length of close to 2,000 metres. RhB will run the train across the iconic six-arched, 65-metre-high Landwasser Viaduct, part of the UNESCO World Heritage Albula Railway.

According to RhB, the mammoth train will require 7 drivers and 21 technicians. Stadler on Wednesday confirmed that it has committed engineers and experts to the project. RhB chief Renato Fasciat said the train will cover a distance of close to 25 kilometres. As the 1,91-kilometre train will only travel at speeds of up to 35 kilometres per hour, the journey is expected to take some 46 minutes. The speed is limited so as to not strain the overhead lines too much.

One of the challenges that RhB will face it that for the attempt to succeed, all 25 trains should accelerate or slow down simultaneously. However, only four trains can be controlled from a single driver’s cab. For this reason, a special intercom system will be installed for the various drivers, who in turn will receive a dedicated training.

Because the record attempt will happen during the day time, other traffic on the railway network will be affected. The Albula tunnel will be closed to traffic for 12 hours, railway traffic between Tiefencastel and Bergün will be down for 2 hours.

The train planned for October will carry 4,450 people on board. Tickets for the journey will go on sale on August 2.