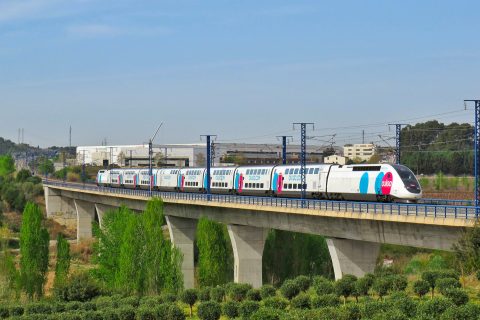 SNCF subsidiary Ouigo Spain marks its first anniversary this week. Since its launch on 10 May 2021, the company has carried more than 2 million passengers between Madrid, Zaragoza, Tarragona and Barcelona, where it competes with the previously sole operator Renfe.

The average occupancy rate of the Spanish Ouigo trains has been over 97 percent since the launch, with peaks of 99 to 100 percent during the festive periods, such as Christmas, Carnival and Easter. “This year’s results show that our offer corresponds to what the Spanish traveller is looking for and that there was a demand that we are meeting”, says Hélène Valenzuela, General Manager of Ouigo España. “Now, the next and most important step is to strengthen this presence”.

The head of Ouigo stressed that the lower price is important to shift passenger to rail. “If we want to make the train the preferred option for citizens, it is essential to be able to maintain the reduction in the price of tickets, fighting against the image of exclusivity of the sector.”

Ouigo Spain operates five return journeys per day on the route between Madrid and Barcelona in 2.5 hours, making 3,674 journeys in the last year. From November, a third operator will join Ouigo and Renfe on the corridor Madrid – Barcelona with the launch of Ilsa’s first train services, branded Iryo.

Ouigo España will soon enter a second phase of operation, arriving in Valencia, Albacete and Alicante in 2022. The operator will launch 3 daily return trips on the Madrid-Valencia line first, which was earlier said to be this spring, no official launch date having been announced yet. A few months after the launch of this connection, Ouigo will offer 2 daily return trips on the line Madrid-Albacete-Alicante.

Eventually, Ouigo will also run trains to Andalusia in the South of Spain, with destination Sevilla. However, this will take longer as the signalling system forms a hurdle. The line is equipped with the older LZB signalling system, which the Euroduplex TGVs built by Alstom are currently not compatible with.

Competitor Ilsa will be able to run trains on the Madrid-Sevilla corridor earlier than the Ouigo trains. The Iryo train fleet, manufactured by Hitachi Rail and Alstom, do have the capacity to travel on lines with LZB systems and have already done test runs on the line. Ouigo will follow after it has adapted its trains to the safety system of the Madrid-Seville line, and will offer five return trips, with a stop in Cordoba. Then, the operator will offer a total of up to 30 daily departures across Spain, with 14 Euroduplex TGVs.

“​This year we have travelled around 2.5 million kilometres and we have transported more than two million passengers. We have created quality jobs and have been a player in the recovery of mobility and the economy in Spain after the pandemic”, said Hélène Valenzuela. “And this is just the beginning.”