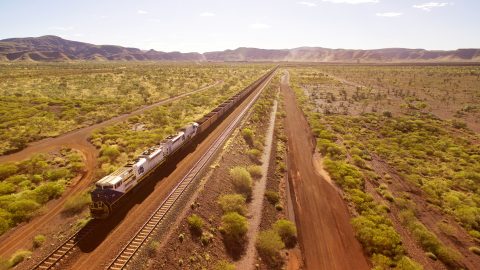 A train on batteries that regenerate automatically sounds futuristic, but is exactly what Australian mining company Fortescue and UK-based Williams Advanced Engineering (WAE) are currently developing. The gravitational energy from the heavy iron ore load will be used to regenerate the batteries while the train is running.

Fortescue completed the acquisition of UK-based Williams Advanced Engineering (WAE) this week, and with it announced the ‘Infinity Train’ plans. As one of the world’s largest producers of iron ore, Fortescue’s mining infrastructure is connected to several ports in Australia via heavy haul railways. The Infinity Train will use gravitational energy to fully recharge its battery electric systems without any additional charging requirements for the return trip to reload.

As Fortescue explains it: There is a lot of energy behind a train travelling downhill with 34,000 tonnes of iron ore. So why not capture all that energy and use it to power the uphill journey? For the project, the battery technology division of WAE will be closely coordinated with Fortescue. Both will be managed by Fortescue’s green energy, technology and development company Fortescue Future Industries.

“The Infinity Train has the capacity to be the world’s most efficient battery electric locomotive”, says Fortescue Chief Executive Officer Elizabeth Gaines. “The regeneration of electricity on the downhill loaded sections will remove the need for the installation of renewable energy generation and recharging infrastructure, making it a capital efficient solution for eliminating diesel and emissions from our rail operations.”

Fortescue’s current rail operations include 54 operating locomotives that haul 16 train sets, together with other on-track mobile equipment. Each train set is about 2.8 kilometres in length and has the capacity to haul 34,404 tonnes of iron ore in 244 ore cars. The company’s rail operations consumed 82 million litres of diesel in financial year 2021, accounting for around 11 per cent of their emissions, says Fortescue. The goal is to be diesel-free by 2030.

Fortescue’s studies and development costs for the Infinity Train are expected to be 45 million euros over the next two years. The technology, to be jointly developed by Fortescue and WAE, will address the reduction in emissions in the hard to abate heavy industry sector, and the companies also see opportunities for the technology to be commercialised on a global basis.