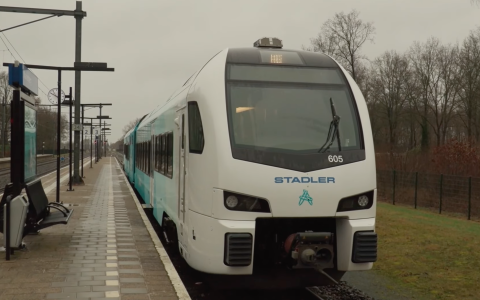 Despite a relatively small battery pack –  the train set used during the trials used the battery pack that normally stores energy recuperated from deceleration and braking as its main energy source for propulsion – the Stadler WINK was able to cover a distance of around 18 kilometres on battery power alone. A subsequent test run between the northern Dutch cities of Harlingen and Leeuwarden showed that the train was able to claim a range of around 25 kilometres, albeit at a reduced speed of 60 kilometres per hour.

During the tests, the stakeholders studied the charging rate with the pantograph deployed, as well as the energy consumption and battery depletion rate on sections of track without overhead lines. Transitioning between the two types of track – electrified and non-electrified – was also evaluated, as was the acceleration performance. Arriva, ProRail and Stadler were able to replicate and confirm the performance of the train on different sections of the northern Dutch railway network.

For ProRail, the outcome of the tests reaffirm the company’s commitment, along with the relevant ministries, provincial governments and transportation companies, to introduce battery trains into regular train services. Arriva echoed that message.