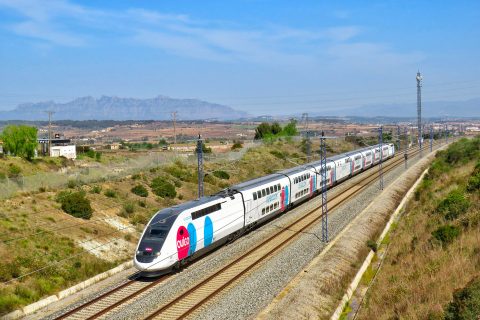 Ouigo launched its service between Madrid and Barcelona this Monday, 10 May. A subsidiary of the French SNCF, it is the first new high-speed operator to enter the Spanish market. Ouigo offers 10 daily trips from Madrid to Barcelona in two hours and 30 minutes.

After more than three decades during which the Spanish high speed lines were operated by national operator Renfe, the launch of Ouigo trains in Spain marks the first new high-speed operator on Spanish tracks. Since December 2020, the liberalisation of the market started in the country. As part of the country’s recovery plan, Ouigo is also supported by the Spanish institutions.

Ouigo will now make regular trips on the Madrid-Barcelona line, with stops in Zaragoza and Tarragona (from the opening of the three lines) and a daily offer of 5,000 seats. The company also plans to continue its development in Spain and offer up to 30,000 seats per day and journeys in less than 2.5 hours on future lines to Valencia, Alicante, Cordoba, Seville and Malaga to reach 30 daily departure.These journeys will be made on board the fleet of 14 Alstom Euroduplex latest generation double-decker trains that Ouigo will put on Spanish high-speed tracks for the first time.

The umbrella organization European Rail Infrastructure Managers (EIM) applauds the development. The organisation believes that the track is better utilised by allowing more competition. In addition, passengers can benefit from more travel options and lower prices as a result of competition on the railways. In 2022 Ouigo will be joined in 2022 by operator Ilsa. With Renfe, there will be three competing companies for high-speed passengers on Adif’s network.

The Spanish high-speed network covers approximately 3,400 kilometers. In 1992 the first high-speed line, the one between Madrid and Seville, was put into use.

The new high-speed line operator made its first trip on the Spanish rails between Madrid and Barcelona Friday 7 May. The day began with a presentation at the Madrid-Atocha station during which several authorities and representatives.

“It is a great pride for SNCF Voyageurs to be present at this important moment for Spain, and to be the first operator to make the opening of the high-speed market a reality by making it accessible everyone”, declared Christophe Fanichet, President and CEO of SNCF Voyageurs. 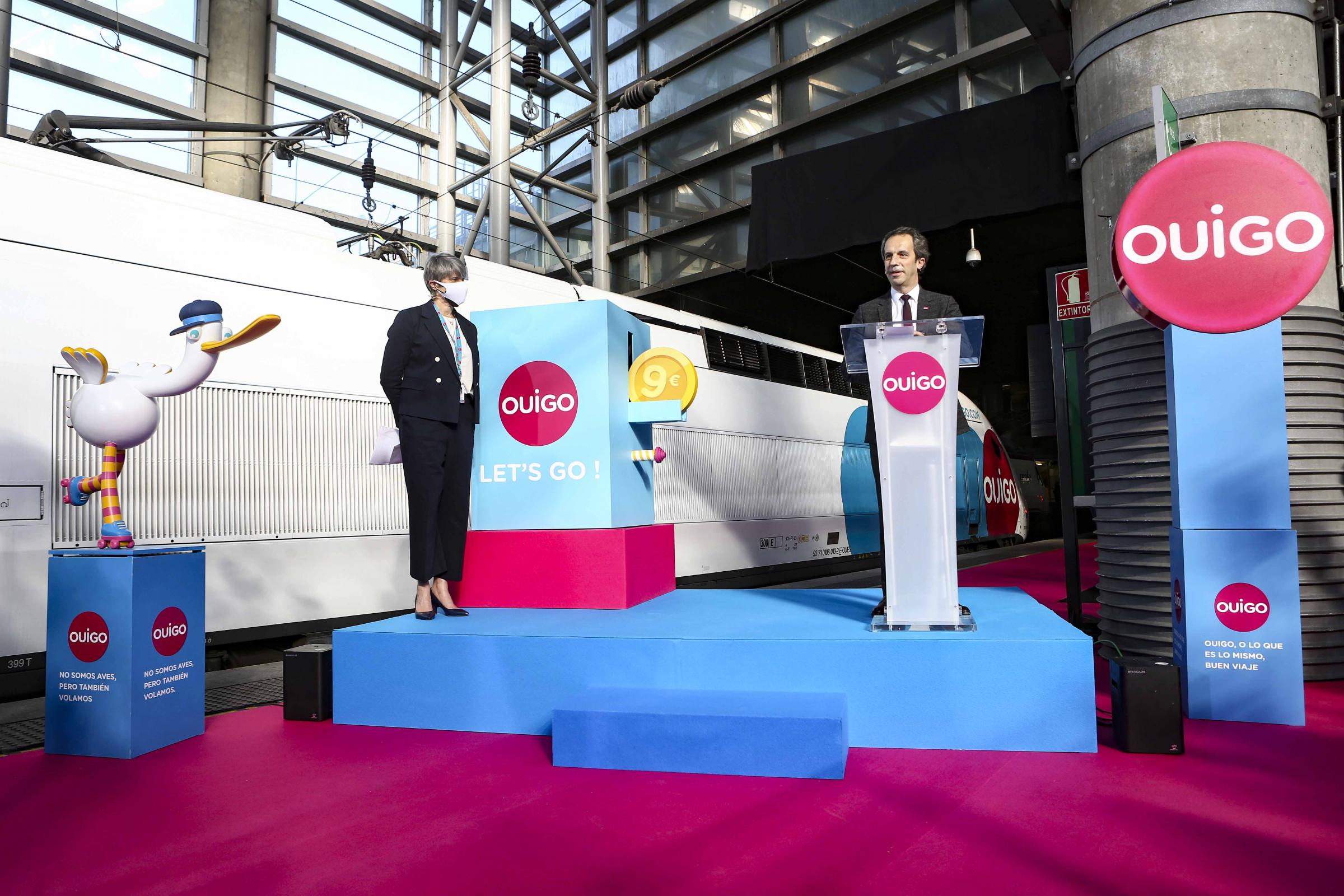 Liberalisation of the Spanish market

After eight years of successful operation in France since 2013, Ouigo is expanding to another country, following the liberalisation of rail transport in Spain. “For this project, we mobilised the best of our SNCF know-how. Ouigo Spain is not a copy and paste of the French offer, it meets the expectations of the Spaniards”, says Alain Krakovitch, Director of Voyages SNCF.

“The Spaniards have always shown their enthusiasm for travel, and Ouigo is here today to make high speed accessible to everyone”, said Hélène Valenzuela, Managing Director of Ouigo España. “We are also delighted to finally be able to launch into this market and materialise our project with a mobility model geared towards a more digital and more ecological experience”.

The operator’s commitment is to ‘offer its high-speed journeys to the greatest number of travelers and to continue to promote transport with the lowest carbon footprint in Europe’. A Ouigo train generates a carbon footprint 80 times less than that of an airplane and 50 times less than that of a car travel, according to the operator. Ouigo in France has 40 destinations, and more than 68 million people have already travelled with Ouigo. SNCF has also operated high-speed lines with Renfe since 2013 like those linking Paris, Toulouse and Marseille to Barcelona and Madrid.

Ouigo will create 1,300 direct and indirect jobs in Spain, including, among others, positions as drivers or crew members, catering company staff and cleaning staff. 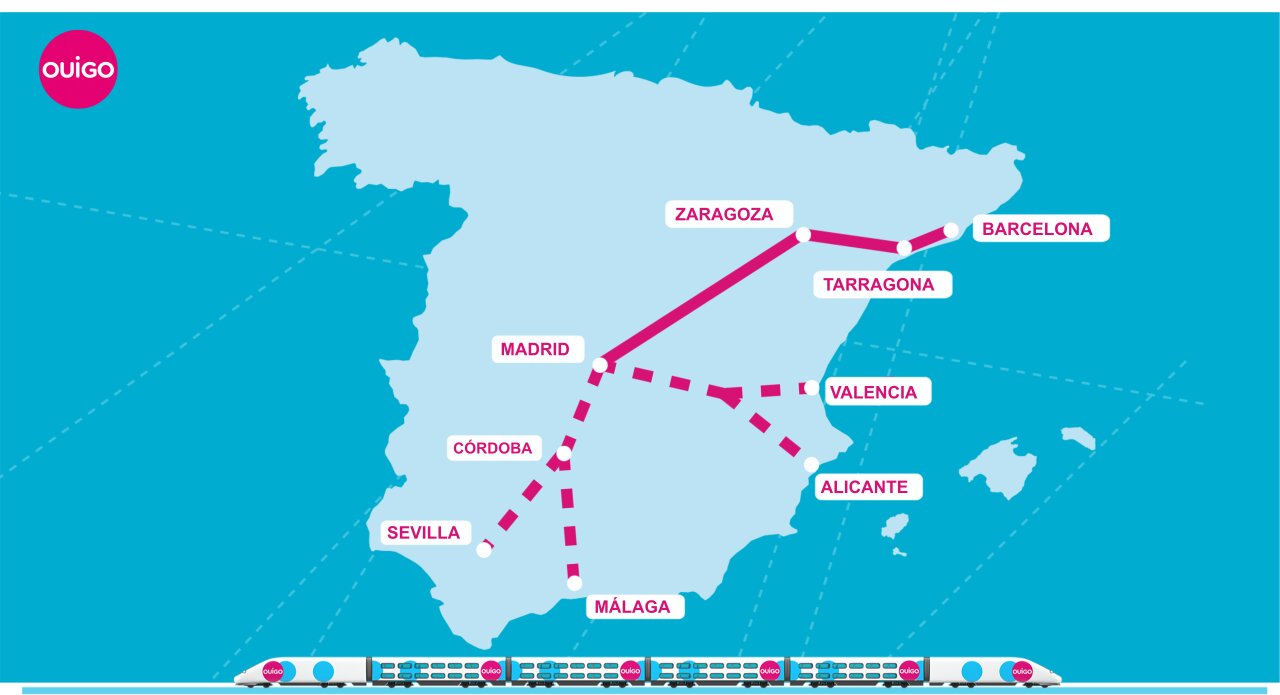