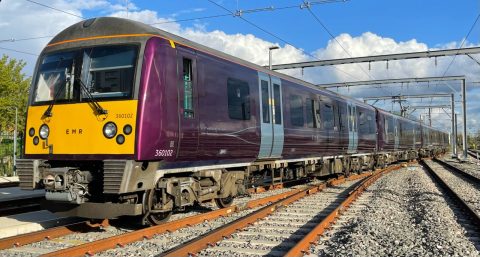 Residents of the East Midlands region will soon have better access to and from London, with one extra train amounting to six services every hour. The first all-electric service by East Midlands Railway is a lot greener than its predecessor, emitting 77 percent less carbon, according to the company. It is also supposed to lower noise levels for lineside neighbours. As the railway undertaking is making its first steps in providing electric train services, industry bodies in the UK recently called for more rail electrification in the UK to speed up de-carbonisation.

The new EMR timetable is made possible by the successful delivery of the 1.5 billion pounds Midland Main Line Upgrade by Network Rail. New overhead line equipment between Bedford and Corby was installed, as well as an additional track between Kettering and Corby.

Refurbishment as soon as possible

The trains that will operate EMR Connect are known as Class 360’s. EMR had hoped to refurbish a number of these trains before they entered service. However, as a result of delays caused by the coronavirus pandemic, that has unfortunately not been possible. EMR says it will refurbish these trains as swiftly as possible and will share more information on this programme soon.

Will Rogers, Managing Director of East Midlands Railway, said: “We are delighted to be able to introduce our new all-electric EMR Connect service for our passengers travelling between Corby and London St Pancras. “Not only will EMR Connect enable a significant reduction in carbon emissions and noise levels, it will also provide more seats, later services and more frequent journeys helping to support the communities and businesses of the region.”

Transporting more passengers in the region

EMR Connect will be comprised of eight carriage electric trains serving Corby, Kettering, Wellingborough, Bedford, Luton and Luton Airport Parkway every 30 minutes on weekdays from 06:00. Services on Sunday afternoon will also be significantly improved, with a full weekday timetable running after 14:00. The service expansions will provide better access to and from London and the East Midlands.

This also means more seats for passengers across the region with further late night and early morning services. At the same time, it allows the reintroduction of peak services between Wellingborough and Bedford, so that passengers will not need to use the replacement coach service. Passengers using the EMR’s Intercity service north of Kettering will be able to make a northbound connection twice an hour at the same times with coordinated interchange times.  The total journey time to Leicester and Nottingham remains the same as it is now.