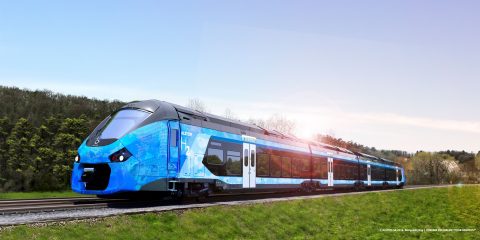 SNCF Voyageurs has placed an order with Alstom on behalf of four regions for twelve hybrid hydrogen-electric Régiolis trains from the Coradia Polyvalent line. In total, the order announced on April 8 is worth nearly 190 million euros. The Grand Est region has an option for two additional trains.

The hybrid hydrogen-electric Coradia Polyvalent has a range of up to 600 kilometres on non-electrified track sections. This four-car, 72 metre long train has 218 seats and offers the same dynamic performance and level of comfort as the hybrid diesel-electric version, according to Alstom. The contract for the first three hydrogen trains for the Bourgogne-Franche-Comté region was signed last month, and these are expected to enter service from 2024. The other trains go to the Auvergne-Rhône-Alpes, Grand Est and the Occitanie / Pyrénées – Méditerranée region. The efforts leading up to the combined order took two years to complete.

“Our knowledge is reflected in the iLint, a train that the company has developed for the German market”, says Jean-Baptiste Eyméoud, President of Alstom France. The Coradia iLint goes into serial production this year. The first iLints went in to passenger service in Lower Saxony, Germany in 2018. The Austrian Government also approved the hydrogen train for operation. “Alstom group wants to become the market leader in green and smart mobility and wants to support the roll-out of an efficient hydrogen ecosystem in our sales markets.”

The French government is also contributing to the transition to hydrogen, for example with the hydrogen plan that it introduced in June 2018. Moreover, the step is in line with SNCF’s PlaneTER programme. The French railway company wants to make the regional mobility solutions of more sustainable, in the belief that increasing the number of TERs (regional express trains) will lead to significantly less CO2 emissions. Other regions in France have already indicated their interest in participating in a second phase of the project.

“France has everything it takes to become a hydrogen champion”, said Jean-Baptiste Djebbari, Deputy Minister of Transport at the French Ministry of Ecological Transition. “The French government is also making every effort to make this ambition a reality. We are responsible for 47 million euros of the development costs for France’s first regional hydrogen train. I am pleased that with this support, the four partner regions have been able to confirm their order for the first fourteen trains.”

French regions have purchased nearly 400 hybrid diesel-electric and all-electric Coradia Polyvalent trains since 2011. The development and production of Coradia Polyvalent trains involves more than 2,000 jobs in France, both at Alstom and its suppliers. And of the fifteen Alstom sites in France, six are involved in this project: Reichshoffen (Bas-Rhin) for the design and assembly, Ornans (Doubs) for the engines, Le Creusot (Saône-et-Loire) for the bogies , Tarbes (Hautes-Pyrénées) for the traction chains, Villeurbanne (Rhône) for the on-board electronics and Saint-Ouen (Seine-Saint-Denis) for the design.