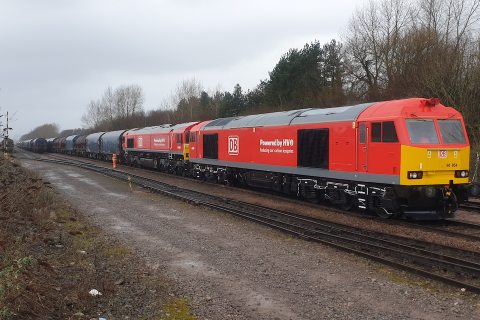 DB Cargo UK and Tata Steel have completed collaboration and trials in commercial service, using the freight operator’s bio-fuelled locomotive. The two companies have successfully used the experimental class 60 locomotive, to run a load of steel products from Tata’s South Wales plant at Margam, Port Talbot, to Round Oak in Brierley Hill in the West Midlands, near Birmingham.

Built to run on diesel fuel originally, DB Cargo UK last year announced that they had modified the locomotive 60054 to run on a pure supply of renewable Hydro-treated Vegetable Oil (HVO). The Class 60 locomotive has now been put into field operations, transporting steel products from Wales to the West Midlands. 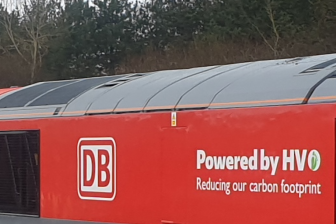 As part of the response to UK government mandates to remove fossil fuels and decarbonise the economy, DB Cargo UK has pressed into service it’s ‘carbon-busting’ locomotive. In a statement, DB Cargo UK say the loco was carrying some 2500 tonnes of steel coil, and was the first Class 60 powered purely by the environmentally friendly fuel to travel on the mainline UK rail network. DB Cargo and Tata have worked together for some time with shipments from Margam.

The train ran from Tata Steel’s steel works in Margam, Port Talbot, to its terminal in Round Oak in Brierley Hill in the West Midlands. The customer’s satisfaction was expressed by logistic operations manager for Tata Steel, Gareth Lewis. “The success of this trial is recognition of our goal for zero CO2 logistics”, he said. “Our close working relationship with DB Cargo UK has been instrumental in achieving this important milestone. We continue to work with all our external stakeholders to look for opportunities which further reduce Tata Steel’s environmental impact in all aspects of our logistical operations.”

The UK government, and the devolved administrations in Scotland, Wales and Northern Ireland, have all made similar commitments to those announced by the London government. DB Cargo UK says the fuel will help make it possible for rail freight to continue to grow while reducing the sector’s carbon footprint. The HVO fuel – Hydro-treated Vegetable Oil – is marketed as ‘one of the world’s purest and greenest fuels’.

To replace fossil-derived diesel, the fossil-free, FAME-free (Fatty Acid Methyl Ester) fuel is synthetically made through the hydro-treatment process from vegetable oils or animal fats. This process, says the operator, can reduce harmful carbon dioxide (CO2) and nitrogen oxide (NOx) emissions by as much as 90 percent.

DB Cargo UK currently operates a fleet of 228 diesel and electric locomotives. They transport around 37 million tonnes of freight annually across the UK and into Europe. Getting that all around uses approximately 45 million litres of red diesel. ‘Red’ refers to a dye added to the fuel, for the purposes of taxation – retail fuels are not coloured and subject to a different taxation regime.

DB Cargo UK’s head of sales, Roger Neary, called this a significant milestone. The company intends to offer all its customers a more environmentally-friendly alternative to traditional red diesel and help them reduce carbon in their end-to-end supply chain. “Tata Steel’s service was the ideal one to trial it on as they, like us, are continually looking for new and innovative ways to reduce their carbon footprint and impact on the environment”, he said. “We’ve now proved that HVO fuel can be used in our Class 60, 66 and 67 locomotives with negligible impact on power output, which is critical considering the volume of bulk materials we transport like steel and aggregates.

The transport secretary, Grant Shapps, the minister with responsibility for the decarbonisation programme, has overseen other solutions, primarily aimed at the passenger sector. He was however keen to point out the leading role played by London and the governments in Edinburgh, Cardiff and Belfast. “The UK is going further and faster than any other major economy to decarbonise transport, harnessing the power of clean, green technology to end the UK’s contribution to climate change by 2050.”