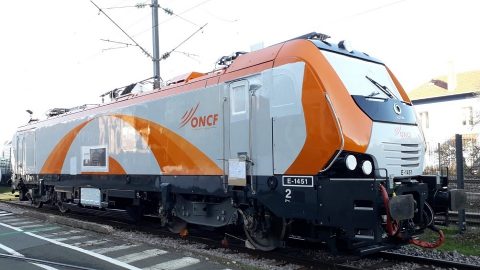 Alstom steps up in Morocco

Alstom strengthens its presence in Morocco. After deliveries of trams and high-speed trains, the French rolling stock manufacturer has been focused on locomotives. It supplied the first Prima M4 electric locomotive for the Moroccan national railway operator ONCF. In total, the company will produce 30 vehicles for Morocco.

The first Prima M4 electric locomotive was shipped to Morocco on 27 December 2019. According to the 2018 agreement, Alstom will deliver 30 units of this type for ONCF. This order costs 1.5 billion dirhams (over 140 million euros). ONCF will use the new locomotives for the haulage operations of both passenger and freight trains. They will serve push-pull trains on the Casablanca – Fez and Casablanca – Marrakech routes in order to provide convenient connection to high-speed trains running between Casablanca and Tangier. In terms of rail freight, the Prima M4 locomotives will deliver wagons loaded with cars from the PSA factory in Kenitra to the port of Tangier as well as the containers from the latter to Casablanca.

Each Prima M4 locomotive has a nominal power of 5.5 megawatts and is able to speed up to 160 kilometres per hour. The vehicles are designed for operations on the electrified routes powered with the three-kilovolt direct current. The locomotives are also equipped with ETCS level 1. Alstom assembles these vehicles at its Belfort plant in France. Besides it, five more French locations are involved in the manufacturing process: Le Creusot (bogies), Ornans (motors), Petit-Quevilly (transformers), Tarbes (traction chain components) and Villeurbanne (onboard electronics). The ETCS components are produced in Madrid. At the same time, the Alstom team in Morocco will ensure the testing, the warranty service and maintenance.

“Over the past 10 years, 20 Alstom electrical locomotives have been put into commercial service by ONCF,” said Noureddine Rhalmi, Managing Director of Alstom Morocco. The deliveries of locomotives are not the only project implemented by Alstom in Morocco. Earlier, the French company supplied 12 Avelia Euroduplex high-speed trains for the Tangier – Casablanca high-speed railway. The latter was launched in November 2018 and became the first high-speed line in Africa.

Moreover, Alstom produced Citadis trams for Rabat – Salé and Casablanca light rail networks. The first system was open in May 2011 and is served by 22 Citadis trams. The Casablanca tram network was launched in December 2012. 74 Alstom-made light rail vehicles run on its routes. Also, the French company has a plant in Fez that is produced cable bundles for rail applications and electrical switch boxes for its European factories. Those details are installed on rolling stock being exported around the world.